MURFREESBORO – Five Chowan players scored in double-figures as the Hawks rolled to a 96-76 win over Lincoln University at home on Wednesday night.

The Hawks spread the offensive wealth well as eight different players etched their names in the scorebook for the game, led by senior forward Jeremy Smith who dropped 25 points to lead all scorers on the court. 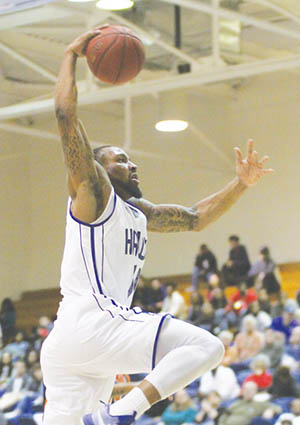 Chowan’s Jeremy Smith goes airborne for one of his two slam-dunks Wednesday night against Lincoln University in a 96-76 Hawks win in CIAA action at the Helms Center. It was Chowan’s 11th straight home win. | Photo by Qui’Wania Miller

Smith, who leads the team in scoring, came off the bench and shot 7-of-10 from the floor and made 11-of-13 from the foul line. Marco Haskins added 20 points, including draining three three-pointers and going 7-for-7 from the foul line. Joe Goodwin posted 16 points and grabbed six rebounds while Tim Hewett and Andrew Lopez chipped in 12 points each. Carlos Arroyo had nine assists in the win.

The Hawks shot 53 percent (31-of-59) from the floor and drained seven three pointers. By the numbers, Lincoln’s stats matched Chowan’s in the game. The difference in the contest was shots from behind the three-point arc. The Lions struggled, hitting just 2 of 10 from three point land.

Chowan will hit the court next this afternoon (Saturday) Jan. 28, when they travel to Richmond to face Virginia Union University in a CIAA Northern Division match up. Tipoff is slated for 4 p.m. at Barco-Stevens Hall.