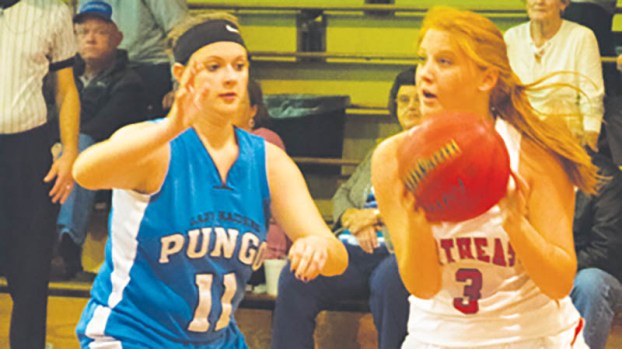 Northeast Academy’s Haven Jilcott drives on a defender in a recent game in Lasker. Jilcott scored six points, but the Lady Eagles fell at home to Community Christian on Thursday 54-40. | Photo by Angie Todd

LASKER – Playing their fourth set of games in the past seven days, Northeast Academy dropped a pair of non-conference varsity basketball contests to Community Christian School of Wilson here on Thursday.

In the girl’s contest, CCS ran out to a ten-point lead after the first quarter, 17-7, and maintained it throughout the remainder of the game for a 54-40 win.  Ashley Hartsfield led the Lady Cyclones with 15 points.  NEA’s top scorers were Carson Johnson and Kierstyn Polson with 25 points between them (13, and 12, respectively).  Addie Piper had seven, with six for Haven Jilcott and two for Haley Jilcott.

Northeast’s varsity boys could not accomplish double-figure scoring in either of four quarters and CCS took advantage with a 25-point lead at halftime (38-to-13), and holding the Eagles to seventeen in the second half en route to a 72-30 win for Community Christian.

L.J. Barnes had 12 points to lead Northeast; with six each for Justin Jones and Josh Byrd, three for Cole Rose and one for Dylan Edwards.   Mike Haney was top point producer for the Cyclones with 16.

Northeast returned to Tarheel Independent Conference action last night (Friday) with a set of games against Terra Ceia Christian that were not complete by press-time.  The Eagles will have their final TIC home game Monday against The Albemarle School, before traveling to Hobgood one night later (Tuesday) to meet the Raiders in the conference regular season finale.   Senior Night will be Thursday (Feb. 2) against Faith Christian before the TIC Tournament begins Feb. 6 at Terra Ceia.