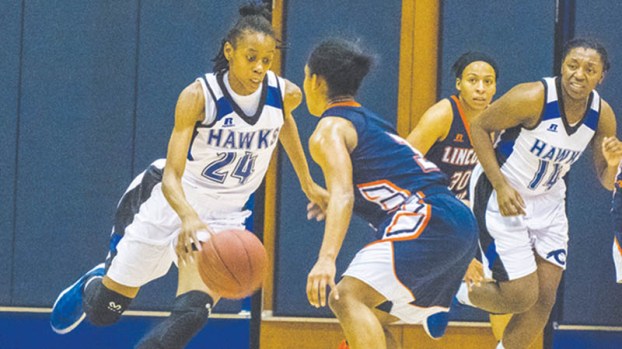 Chowan came out firing after opening the game with a 7-0 run. The Hawks turned 17 Lincoln turnovers into 18 points in the first half and won the battle under the glass with 29 first half rebounds to the Lions’ 21. Chowan scored 14 of their first half points at the foul line with Jordan Payne hitting 7-of-7. Payne recorded 15 first half points while Dhyamond Crenshaw came off the bench to score 10 first half points.

The Hawks opened the third quarter much like they left off at the conclusion of the first half. Crenshaw created havoc on both ends of the floor in the game. The junior forward tallied six blocks and five steals to go with 16 points and nine rebounds.

Payne hauled in nine rebounds to go with her game-high 28 points, just missing another double-double. Senior guard Shaikeyla Jordan came off the bench to score 13 points, and she also tallied three steals. Jada Lee dished out seven assists in the game.

The Hawks have a tall task this weekend when they travel to Richmond to face first-place, nationally-ranked, and undefeated Virginia Union University (18-0; 9-0, CIAA) Saturday (today) in their next outing.  A win would leave Chowan a half-game out of the Northern Division lead as the league race reaches the halfway point.

MURFREESBORO – Five Chowan players scored in double-figures as the Hawks rolled to a 96-76 win over Lincoln University at... read more