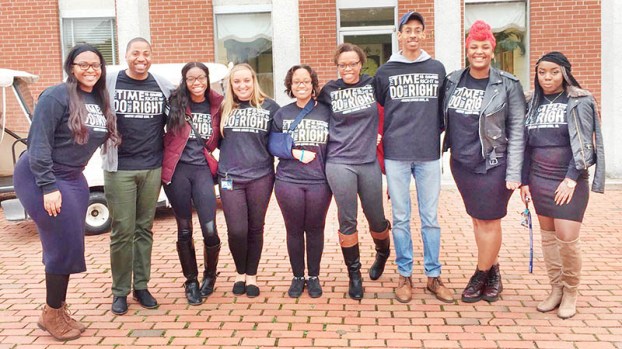 MURFREESBORO – Monday, January 16, a special Perspectives event was hosted on the campus of Chowan University in honor of the late Reverend Dr. Martin Luther King Jr.

As they entered Turner Auditorium filling hundreds of seats, Chowan students and faculty alike could be seen wearing shirts with the quote, “The time is always right to do what is right.” A famous quote of Reverend Dr. Martin Luther King Jr., those words were part of his address to Oberlin students on October 22, 1964 in his speech “The Future of Integration.”

Reverend Mari Wiles, Minister to the University and Associate Dean of Students, opened the event referencing Dr. King’s “Drum Major” speech, given two months prior to his assassination, essentially what would be known as his own eulogy. Wiles quoted Dr. King, stating, “If any of you are around when I have to meet my day, I don’t want a long funeral…I’d like somebody to mention that day that Martin Luther King, Jr. tried to give his life serving others.”

Wiles then led the students and faculty in prayer, acknowledging this day as a time of remembrance and service. She prayed that the students would find “great beauty, and the power in loving someone and being loved, and find that to be eternal.”

The video began with a clip of Dr. King speaking to March on Washington, August 28, 1963. Dr. King referenced the event as the “greatest demonstration for freedom in the history of our nation.” This speech would later be known as the “I have a dream” speech, forever engraved in the hearts of the American people who believed in the civil rights movement and the struggle for freedom.

However, as Dr. Moore pointed out during the narration of the film, the speech did not begin in this manner. Dr. Moore highlighted that half way through the speech a friend yelled out to Dr. King, “tell them about your dream.” This prompt encouraged Dr. King to set his written speech aside and improvise as he gave his now famous, “I have a dream” speech, extemporaneously. As Dr. King shifted focus, he began to preach to the hearts and souls of those in attendance, as well as to those viewing the film as they sat in Turner auditorium in the present, watching the video.

The presentation concluded by referencing President Barrack Obama’s “Farewell” speech, linking Dr. King’s dream to President Obama’s hope. Obama addressed his supporters stating, “you believe in a fair and just and inclusive America.” The narration provided by Dr. Moore furthered that sentiment; “From Dream, to Hope, to you. You are the future.” This special Reverend Dr. Martin Luther King Jr. Perspectives event served as a reminder that, while we have come a long way, and many of Dr. King’s dreams have come true, we still have a great deal of work to do.

As a graduation requirement, students at Chowan University are required to pass four semesters of Perspectives. Each semester of Perspectives requires the student to attend eight events, including worship experiences, lectures, convocations, plays, concerts and art exhibits. Typically, perspectives events are held each Wednesday at 11 a.m. in Turner Auditorium inside the Columns Building.