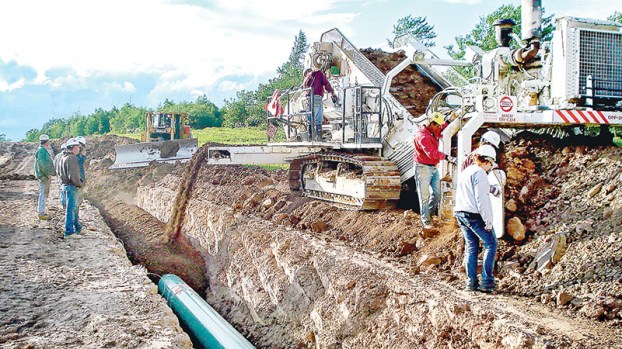 This artwork, submitted by Dominion officials as part of their media package in 2014 to announce a proposal to build a natural gas pipeline, depicts the construction phases of the project.

HALIFAX – A local group of landowners and concerned citizens say they want to do all they can to stop the efforts of Dominion Power and its partners who wants to construct a multi-state natural gas pipeline that will pass through portions of Halifax and Northampton counties.

Yesterday (Wednesday), the Concerned Stewards of Halifax County (CSHC) announced that they have become a chapter of the Blue Ridge Environmental Defense League (BREDL).

The group has invited Halifax and Northampton residents to learn more information at their next meeting, slated for 6:30 p.m. on Tuesday, Jan. 31 at the Halifax County Cooperative Extension Building, located at 359 Ferrell Lane in the town of Halifax.

The Halifax County group is led by its president, Valerie Williams, a landowner directly affected by the Atlantic Coast Pipeline (ACP). She expressed her optimism in becoming a chapter of the Defense League. 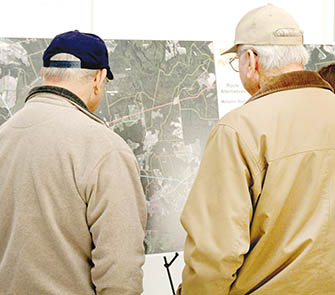 Property owners study a map of the proposed route of the Atlantic Coast Pipeline through Northampton County at a January, 2015 workshop hosted by project officials in Jackson. | File Photo

“They give us leverage, training, expertise, and much needed resources to help us in our local campaign to stop the ACP.”

Williams said there are many in Halifax and Northampton counties who are a part of that resistance. She added that her group is very concerned about the potential leaks, explosions, and other environmental harms that the ACP presents.

One of the greatest concerns, she said, is surrendering private property against their will through the eminent domain process. Williams described the process as “predatory exploitation,” saying, “The seizure of homes and farms by the pipeline industry under the deceitful use of eminent domain is indeed a form of predatory violence against both natural and human communities. Property means that you own something. We should decide how we use it, how to transfer it, what we do with it and who we exclude from it, like pipelines.”

Normandy Blackman, a CSHC member, said, “The Bill of Rights affords us special freedoms to enjoy our private properties without the threat of a for-profit company taking it from us for their own profits and corporate benefit.

“This pipeline is a threat to our democracy. We must unite as a community to stop this threat to our rights and land,” Blackman added.

BREDL community organizer Pastor Cary Rodgers said that CSHC is one of five BREDL chapters that are organized to stop the pipeline along its route in North Carolina, with two more in Virginia. BREDL is a statewide community-based, non-profit environmental organization with chapters and projects in six states. They focus on earth stewardship, environmental democracy, social justice, and community empowerment.

“No pipeline project has the right of eminent domain until they have been issued a Certificate of Public Convenience and Necessity,” Rodgers stressed. “The ACP has not yet received it and is still in the application phase.”

In 2015, local Halifax landowners and citizens first formed the Concerned Stewards of Halifax County to oppose and stop the ACP project, which would crisscross through eight counties in North Carolina from Northampton, Halifax, Nash, Wilson, Johnston, Sampson, Cumberland, and Robeson.

Plans to construct that 550-mile pipeline were announced in September of 2014.

If approved by federal and state regulators, the pipeline, projected with a 1.5 billion cubic feet per day capacity, will cross into North Carolina near Pleasant Hill in Northampton County and proceed southward along a route just east of US 301. It will cross into Halifax County through the Roanoke River National Wildlife Refuge, downstream from Weldon.

The 550-mile Atlantic Coast Pipeline (ACP) will originate in Harrison County, West Virginia (tapping into the Utica and Marcellus shale basins in West Virginia, Ohio and Pennsylvania) and end in Lumberton, NC. In North Carolina, the pipeline will be constructed parallel to I-95 and US 301.

Opponents of the pipeline cite environmental concerns and the loss of over 4,370 acres of land from West Virginia to North Carolina.

‘Not one penny more’