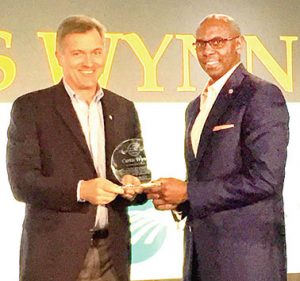 “Leading an electric cooperative requires commitment to reaching out to all the members, meeting them where they are and urging them to become engaged,” said Matheson to the audience of co-op leaders. “Curtis Wynn is a leader and innovator committed to improving the lives of the people he serves. I applaud Curtis for his contributions to his co-op, to our industry and the larger community – in North Carolina and internationally.”

“While my name is on the award, I’m quick to make it very clear upfront that if not for the grace of God himself, a supportive board of directors, and a team of dedicated and determined employees I would not be standing before you,” stated Wynn.

Wynn expanded Roanoke Electric’s communications channels to more than 30 to include the cooperative’s blog, e-newsletter, mobile app and various social media platforms. He initiated “Straight Talk” Forums – a series in the co-op’s seven-county region giving Wynn the opportunity for face-to-face dialogue with his member-owners.

One award judge praised Wynn for embracing “numerous platforms to reach the members and share the co-op message.” Another judge noted that “this CEO is ready to engage, both with members and employees.”

Like all electric cooperatives, Roanoke Electric is owned and governed by its member-owners. Helping members understand that role is an important part of Wynn’s work.

“Stressing the member-owner connection is so important,” wrote one of the judges. “It’s the heart of what makes the co-op model work.”

In recent years, Roanoke Electric Cooperative has also pioneered an on-bill financing program that enables co-op members to make energy-efficiency upgrades to their homes at no upfront cost.

Under Wynn’s leadership, Roanoke Electric Cooperative was voted area’s best electric company by readers of Roanoke-Chowan News Herald and was named Business of the Month (June 2016) by the Gates County Chamber of Commerce.

Wynn has served as CEO of Roanoke Electric Cooperative since 1997, and he has represented North Carolina on the NRECA board of directors since 2007.

In 2016 he traveled to Bolivia with the NRECA International Foundation, which works to bring electricity to developing nations.

The J.C. Brown award memorializes the late J.C. Brown, who – as editor and publisher of NRECA’s RE Magazine –is best remembered for his dedication to communication as a vital link connecting electric cooperatives with each other as well as with their consumer-owners.  The panel of five judges consisted of communication and management experts in academia, business and industry, including electric co-ops.

North Carolina’s 26 electric cooperatives serve more than 2.5 million people in 93 of the state’s 100 counties. Each cooperative is private, not-for-profit and governed by a board of directors, which is elected by the membership.

The National Rural Electric Cooperative Association is the national service organization that represents the nation’s more than 900 private, not-for-profit, consumer-owned electric cooperatives, which provide service to 42 million people in 47 states.