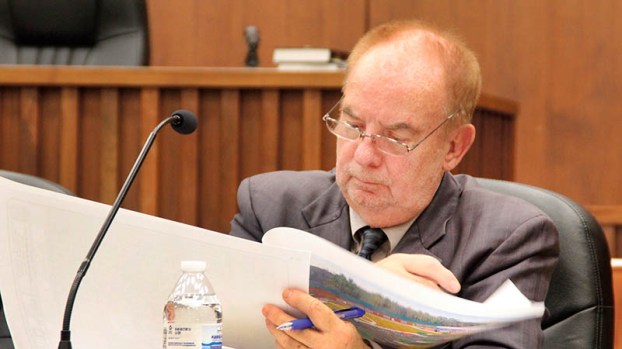 At a meeting held earlier this month, Gates County Commissioner Ray Freeman is shown studying one of the options to renovate/rebuild Central Middle School. At last week’s board meeting, Freeman was one of four to vote in favor of an $8 million project to fix problems at the aging school. | Staff Photo by Cal Bryant

‘Not one penny more’

After a 30-minute discussion, the commissioners, in a 4-1 vote, approved borrowing $8 million to rebuild/renovate Central Middle School.

The aging facility, built in 1957, has been the subject of numerous debates over a period of 12-plus months about its deplorable conditions. Williams and the county’s Board of Education favored a plan to address the growing list of problems at the school, but those ideas were sidetracked when the county’s voters defeated a referendum in November that would have raised the property tax rate by 12 cents to build an entirely new Central Middle School at a price tag of $18 million.

At the commissioners’ meeting on Jan. 4, Williams presented the board with six options of replacing/renovating the school. They ranged in estimated price from a low of $5.5 million (basically for work on the roof) to a high of $15.3 million.

One week later at a workshop conducted by the commissioners, they leaned towards an $8 million option submitted by Pinnacle Architecture. That plans calls to demolish and reconstruct the administration, 8th grade wing, gymnasium, and renovate the 7th grade wing. It keeps the existing sixth and seventh grade buildings. Additionally the existing cafeteria will be utilized. New construction consists of an eighth grade wing, gymnasium, locker rooms, media center, music/band room, art room, group toilet, teacher work room and an administrative area including guidance and student support services.

The existing seventh grade wing will be renovated. It may include an upgraded HVAC system, floor coverings, lighting, windows and doors. The existing sixth, seventh grades areas along with the cafeteria will be painted.

In all cases, the county was looking to use Qualified School Construction Bonds (QSCB, used for new construction) as well as Qualified Zone Academy Bonds (QZAB, use is restricted only for renovation projects).

The plans were on the agenda again for discussion on Jan. 18 when the commissioners met in a regularly scheduled meeting.

“I thought option two from Pinnacle Architecture is the most feasible,” said Commissioner Henry Jordan. “This is something that is needed for our children and our teachers. I would like to see us move forward on this; borrowing $6 in QSCB funds and $2 million in QZAB funds and seek approval from the LGC (Local Government Commission) for us to enter into that type of debt.”

To pay that anticipated debt service, projected in excess of a half million dollars annually for 15 years, Jordan suggested using the county’s recently reallocated state sales tax. That new method of distributing sales tax, approved last year by the state’s General Assembly, increased for small, rural counties such as Gates. It has been projected this new tax distribution formula will result in Gates County receiving over $500,000 annually in “new” money.

“Using this new money to pay off the loan could mean no tax increase for our citizens,” Jordan stressed. “If for some reason these newly allocated funds stop coming in from the state, we’re looking at no more than a three to five cents property tax increase.”

Jordan made his opinion as an official motion, thusly seeking a total of $8 million between the two bonds to perform the scope of work as outlined in option two submitted by Pinnacle Architecture. Jack Owens, vice chairman of the board, offered a second to Jordan’s motion.

“We’re getting ready to vote to spend a whole lot of money,” said Commissioner Billy Felton as the board opened discussion on Jordan’s motion. “We’re going to be paying for this for many, many years to come.

“I’ve asked repeatedly for two things and still have not got them – a long-range plan for all our schools, not just this one school – we’re going to commit a lot of money to one school when the other schools will need something – and I’ve requested a prioritized list of the problems at the middle school and I have not yet seen that either,” Felton added.

“I just want everyone to be aware that we’re referencing option two as submitted by Pinnacle,” Owens remarked. “We need to realize that all this work has to go out for bids. An RFP (Request for Proposal) is required to go out. The bids may come back under $8 million. What we’re doing here today is nailing down the fact that we’re agreeing to spend no more than $8 million. It may wind up being less based on the bidding process.”

“This option basically comes very close to getting us a whole new school,” Jordan said. “The other options, some were window-dressing; others listed renovation as high as what was on the voter referendum to build a whole new school. This option is several million dollars less.”

“I think all of us on this board understand we’ve got to do something,” said board chair Linda Hofler. “What the citizens need to know is the monetary end. We are limited on the amount of debt we can carry. That limit is $1.65 million. Right now we’re at $951,000. We are going to pay off the library (construction loan) in March and that will save us about $151,000.”

Hofler said the total payback on the two bonds is $535,000 annually, and that amount is based on the funding being obtained at zero interest, which is typically the case in QSCB and QZAB bonds.

“That puts us right at $1.4 million in debt service; that doesn’t leave a lot of room should we need it,” she stressed. “We have been fortunate there has been a redistribution of state sales tax and that gives us money coming in that is unexpected. The General Assembly has given that to us, and they can take it away as well. We have to prepare for that contingency as well.”

Gates County Manager Natalie Rountree said, to date, a little less than $140,000 of this “new” money has been received.

“Based off estimates, we would receive a little less than $560,000 per year,” Rountree reported to the board.

However, Hofler noted there remains a concern among county citizens about the possibility of a property tax increase.

“We are in a (tax) revaluation year,” Hofler said. “That is also of interest because that’s the joker in the deck. Right now, with our current tax valuation, one penny raises $92,000. We don’t know what that one penny will raise next year because we do not have the final numbers on revaluation. We will try to stay revenue neutral.

“The God-send is this redistribution of sales tax. If that continues at the present rate we will not have to raise taxes,” Hofler said. “If we do, it will be a very minor amount.”

Hofler encouraged Dr. Williams and the school board to develop a long-range plan for all schools in the district.

“We have three schools built in the 1950’s and they all have problems,” Hofler said. “If something catastrophic happens to one of our other schools, we have to have funds on hand. We want to do right by our students, but we also have a fiscal responsibility to operate in the most efficient way we can for our taxpayers.”

In a show of hands, the vote to approve borrowing the combined $8 million in bonds was favored by Hofler, Owens, Jordan and Ray Freeman. Felton voted against the measure.

“I voted against this simply because there is no long-range plan in place; I cannot vote to commit this much money without knowing what’s going on at Central Middle and all our schools,” Felton said, explaining his opposition.

“You need to stay within this $8 million budget; don’t come back and ask for more money….not one penny more,” Hofler warned Williams following the vote.

Williams, before hugging the commissioners as a show of thanks, vowed to keep the project within budget, possibly lower if all possible. He also promised Felton and the other commissioners that a 10-to-15 year long-range plan for all schools in the county is on its way.

SEABOARD – Plans are currently being proposed by a private firm to construct a state-of-the-art facility near here that will... read more