LaVelle was born in Ahoskie, NC to Seth Thomas Parker and Ruby Wiggins Parker. She attended the Ahoskie public schools, and graduated with the first class when Chowan College reopened after World War II, and from East Carolina University, trained and prepared to serve as a teacher. While at Chowan College she, a fellow student, and a professor visited many high schools in Eastern North Carolina to tell them about the great programs at Chowan, and to recruit them as students. They were very successful in increasing the enrollment. 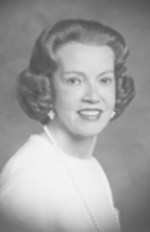 She was gifted with a beautiful singing voice and during her high school and college career often sang at church and at various other places. She later used this gift in her teaching career of twenty-one years to sing to her students and to teach music to them. She loved all of her students and wanted each one to excel in some special way. One of the great joys of her life was to come into contact with a former student and feel the warm love and caring that they felt for her. She enjoyed the same feelings of appreciation and love from the parents, and from her school principals and other supervisors.

In 1952 she married Lee Rawlings Hall from New Bern. They had met while both were attending East Carolina University. While he was serving in the United States Air Force they lived in Panama City, Florida and Valdosta, Georgia. After he completed his Air Force duty he also became a teacher, principal and superintendent. As promotion opportunities became available they lived in Ahoskie, Colerain, Elizabeth City, Windsor, and Tarboro, where she completed her teaching career.

In every community she lived in she sought to be an active member. She always taught a Sunday school class, was active in the woman’s club, was a circle leader in her church, and volunteered in many of the other activities of her church. When she moved to Tarboro she became president of the Tarboro Newcomers Club and served very successfully in this role for a number of years.

LaVelle always had a very special feeling for anyone in need and gave generously to many individuals and to various causes. She loved animals and throughout her life gave special caring to her dog, whom she always treated as a member of the family.

After retiring from a successful career in teaching she established a china and crystal wholesale and retail business. This became a major business and at one time she carried an inventory of more than 50,000 pieces.

She leaves to treasure her memory her husband of 64 years, her beloved daughter Katherine Hall of Vienna, VA and her husband Jeffery along with their children, Adam Lee Simon and Lauren Simon, stepson Leland Wayne Hall and wife Linda Swanson Hall of West Chester, PA along with their children, Heather and husband Nate, James and wife Rebecca and Eric; and a nephew, Calvin W. “Robbie” Parker and his wife Malinda Pierce, and their sons Brad and Scott of Williamston, NC.

She was preceded in death by her brother, Calvin W. Parker, and sister-in-law, Dorothy Leggett Parker.

A graveside service will be held in the Highland Memorial Gardens in Ahoskie at 2 p.m. on Wednesday, January 25 with her nephew, the Rev. Calvin W. “Robbie” Parker officiating.

In lieu of flowers memorials may be made to Tarboro Community Outreach, 701 Cedar Lane, Tarboro, NC 27886 or a special charity of your choice.

Arrangements have been entrusted to Carlisle Funeral Home, Inc., of Tarboro. Online condolences may be directed to the family by visiting www.carlislefuneralhome.com.