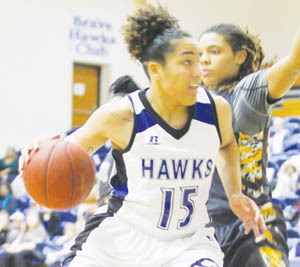 Chantel Roberts got the Hawks on the board first in the game after draining a three ball to open the first quarter. The Hawks held that lead for just one possession and Bowie State took over. They went on to outscore the Hawks 20-15 in the first.

Bowie took a 32-28 lead into the halftime break but back-to-back scores by Payne to open the third quarter gave the Hawks their first lead since the opening play of the game at 33-32.  The third and fourth quarters were back and forth with 13 different lead changes and 10 ties. It was Bowie State who pulled away late in the overtime period and iced the game after hitting 4-5 from the foul line over the last two minutes.