The win broke a two-game slide for the Hawks 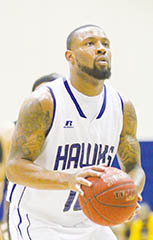 Chowan’s Jeremy Smith eyes the rim on a free throw attempt in Saturday’s game with Bowie State. The Hawks made 15-of-18 foul shots in the second half in pulling off the 59-58 win over the Bulldogs, for their 10th straight at home this season. | Next Level Photos / Charles Revelle

Chowan won it at the free throw line where they were 15-of-18 in the second half from the charity stripe. Jeremy Smith only missed one foul shot all night while Carlos Arroyo and Marco Haskins were a perfect two-for-two.

Smith’s 23 points helped the Hawks in a second half surge that got them the one point win. The game featured nine ties and 12 lead changes but the Hawks got the final say.

“We practice our free throw shooting in practice,” said a grinning Smith after the game. “Our three-point shooting was also key as well as our defense on (Michael) Briscoe – we didn’t allow him to penetrate.

Chowan shot 41 percent (18-44) field goal shooting from the floor in the game and saw three players net double-figures. Besides Smith’s 23 points, Kevin Kuteyi scored 12 points and went 4-of-6 from beyond the three point arc, while Joe Goodwin scored 11 points and grabbed eight rebounds.

The Bulldogs were paced by Ahmaad Wilson who scored 14 points.

“We needed this win because we’d been leaking oil the last couple of games,” joked Chowan coach Brett Vincent. “But we’ll just roll it out and keep battling.”

Chowan will hit the floor again on Wednesday, Jan. 25, when they host Lincoln University at the Helms Center. Tip-off is slated for 7:30 p.m.