The jayvee girls win helped the Eagles avoid a sweep on the hardwoods at the hands of the Raiders. 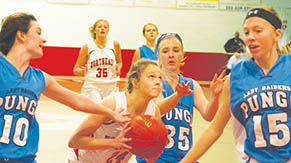 Northeast Academy’s Addie Piper (w/ball) eyes the rim as she is surrounded by Pungo Christian defenders in a recent game. Piper had seven points in Belhaven Thursday night, but the Lady Eagles fell on the road 44-37 to the Lady Raiders. | Photo by Angie Todd

Emalee Jones added 12 points while Jessie Martin had eight, six for Allie Liverman and two each for Olivia Wheeler and Savannah Martin.

In other contests, Pungo j.v. boys edged NEA, 41-40, in their game despite 17 points from Brandyn Polson.  J.T. Simmons had eight points with seven for Jon Stephenson, four for Noah Lassiter, three for Michael Smith, and two for Kendall Timberlake.

Kiersyn Polson led Northeast’s girls (0-10) with a dozen points while L.J. Barnes was high scorer for the NEA (2-8) boys with nine.