Rising above the storm

POWELLSVILLE – It’s been over three months since Hurricane Matthew wreaked its havoc on the local region and nearly four months since Tropical Storm Julia, but the aftermath of the two storms continues to be an adventure for many people in Bertie County.

Tuesday night here, at their monthly meeting, the Bertie County Board of Commissioners heard from Chris Hilbert of Holland Consulting Planners out of Washington, NC who came with an update on the disaster recovery effort.  Holland is one of the state’s foremost hazard mitigation planners, supervising buyouts and managing recovery programs, including housing replacement and rehabilitation. 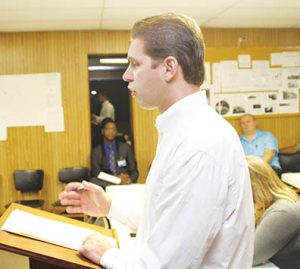 “Last week there was a meeting in Plymouth where they talked about the natural application process for people to apply for buyouts, elevations, or reconstruction,” Holland said. “Those are the three options people have.”

Chairman John Trent wanted to know if there had been any offers of buyouts, to which Hilbert said only applications were being taken now.  Most of the storm damage in the county was done by water with some homeowners and business owners nearly done with cleaning out the final rotting remains of the flooding.  Next comes finding out what their insurers or the Federal Emergency Management Administration (FEMA) is going to do.

“It just depends on what people want to do,” Hilbert replied. “We’re taking in preliminary information because you must fill out the application.  After that it’s put on a spreadsheet while the county and the town submit a letter of interest to the state indicating they are interested in doing a mitigation project.  Those letters are due by March 31. We’re hoping at that time to have as many letters as possible turned in; we’re even targeting some properties.”

Hilbert says he is available in Windsor once a week for people who have questions about the process.

He also informed them there’s been a meeting with a group from both N.C. State and East Carolina Universities on a future hydrology study on why there’s been so much flooding in Bertie County.

“They’re looking at options like funding, re-directing water, and the economic components, particularly with flooded businesses like you had in Windsor,” Hilbert noted.

Commissioner Ron Wesson asked if homeowners accept FEMA or insurance funds now, would that affect their future chances for mitigation.

“They should get what they can get from FEMA, flood and disaster insurance, right now,” Hilbert answered. “These mitigation projects are more long-term.  I handled Hurricane Floyd, and about 90 percent of the people we ended up buying out and moving were people who had moved back into their homes; but that process took about three years for a variety of reasons.  It shouldn’t take that long this time.”

County Planning Director Traci White interjected with information that owners should keep adequate receipts because they need to show monies received went into repairs; otherwise, that amount could be deducted from any future mitigation.

“We will check back to see what they have already received,” cautioned Hilbert. “They can’t stick that (FEMA or insurance) money in the bank and also collect buyout money because that’s considered duplication of benefits. Verifying it is just part of the process.”

Commissioner Stewart White asked about homeowners who might have secured loans and how that might affect their eligibility.

“Typically with a buyout, if there’s an SBA Loan, then that would be paid off through the buyout because (mitigation means) you’re purchasing that property, and the loan is part of the property.

Trent said there have been no offers for a buyout in the county, only applications for data in case an offer comes from the federal government or the state.

“This is being put in place so when we have the data, we can move,” Trent said.

Hilbert said the General Assembly in Raleigh has not decided on all applicable programs, nor an amount of money; and the legislature won’t re-convene in the Capital until late January.

“That’s still within the March 31 deadline,” noted Hilbert, “so it’s not going to hold anything up. Just as there was in Floyd, it could be that more buyout programs may be available.

Hilbert said Holland is seeking to get FEMA’s list of applicants who suffered damage and will reach out to them in case they want to apply for mitigation.

“The more information we can give them, the better,” said Traci White.

Wesson asked if Lawrence Memorial Library – the building of which is owned by the county – had applied.  Hilbert said the Library’s priority status was beneath that of residential applications.  Trent said he was aware that the Library had submitted an application.

Commissioner Ernestine Byrd Bazemore asked about more and better ways to alert citizens about applications, such as through churches.

“We can do that,” Hilbert said. “And the Bertie County Facebook page is another good way of doing it. It takes some time for this approval process to come into play.  The state is dealing with a lot of applications; some with a deadline of September, but we’re on the front end of that. We know who we’re trying to target.”

Former Bertie Commissioner Patricia Ferguson asked how serious was the proposed hydrology study of the county’s wetlands and their effect on flooding.

Trent said the US Army Corps of Engineers put an $800,000 price tag on doing study years ago.

“As this whole Board knows, the flood insurance through the state and the federal government came in front of us through state emergencies and they are $28,000,000,000 dollars in debt,” Trent acknowledged. “Each flood that has cost us here in Bertie County – four in 17 years – multiplied out, has come to something like $35-and-$40 million dollars.  We need to do the study for the $800,000 and come up with a water diversion plan; let’s figure out what we can do.”

Trent said he and Emergency Services Director Mitch Cooper met earlier with the Corps of Engineers and the Corps verbally committed to what they were going to do, but later promised oversight for $3,000,000.

“Why would we want temporary housing for that amount when we can do permanent housing for $300,000 (one-tenth of that),” opined Trent.

Wesson cited agriculture losses, primarily peanuts and cotton this year due to drainage.

“No one has owned the drainage issues in North Carolina,” Wesson cited. “Maybe this money from the state can do it.

We’ve got to take advantage of every (opportunity) to make us whole again.”

“This has been an aggravating situation for Bertie County to be in because with flooding from Julia and Matthew, we’ve received a double-punch in the gut,” said Trent.

The chairman praised his fellow Commissioners for what assistance for the county they have been able to secure.

“They went to D.C. and spoke to people up there, and then they came down here meeting with us,” noted Trent. “This Board has gone the extra mile to get everything that can be gotten for Bertie County.  At one time, we weren’t even going to get individual assistance, but thanks to the Board it finally showed up, and we’re getting things done as fast as we can.”

Commissioner Tammy Lee addressed health concerns by saying the Albemarle Regional Health Board – of which she’s a member – is aware of the long-term effects of this flooding.

Economic Development Director Steve Biggs reminded the Commissioners that FEMA’s advisors were in town doing hazard mitigation at the Windsor Community Building from Jan. 17 to Jan.20.

Hilbert concluded that the hydrology study committee would be in Windsor sometime in April.

“It’s a starting point,” he said. “We need these studies in order to get the money.”