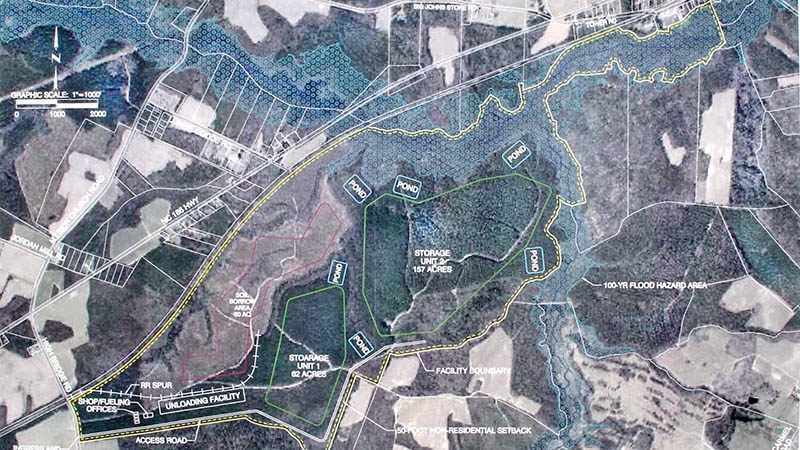 Shown above is a map of the proposed High Bridge Park project, located off NC 186 between Seaboard and Margarettsville. VistaGreen, a private firm, has applied for a special use permit to develop the 804-acre tract into a facility to store and recycle coal ash. Two landfills there will be lined with a durable membrane of high density polyethylene (a sample of which is shown below). | Map provided by VistaGreen

SEABOARD – Plans are currently being proposed by a private firm to construct a state-of-the-art facility near here that will be used for storage and recycling of coal combustion residuals (CCR, commonly referred to as coal ash).

On Tuesday, C. Wood Beasley III of Colerain, one of the two founding partners of a company known as VistaGreen, filed for a special use permit on an 804 acre tract of land located southeast of NC 186 between Seaboard and Margarettsville. That property lies between High Bridge Road and Tower Road.

According to the Northampton County Planning and Zoning Department, the tract now owned by VistaGreen is zoned A-R (Agricultural/Residential).

The request for a special use permit will initially be heard by the Northampton County Planning Board during their next scheduled meeting on Feb. 8. That meeting is open to the public.

Beasley, in an interview with the Roanoke-Chowan News-Herald, said the proposed High Bridge Park facility would only accept CCR material, which is a byproduct of the coal combustion process. He said the material would be stored within two landfills, each lined with a thick, durable membrane of high density polyethylene that will be placed on top of a two-foot layer of compacted clay soil. That barrier is designed to prevent any contaminants from migrating into groundwater, Beasley said. 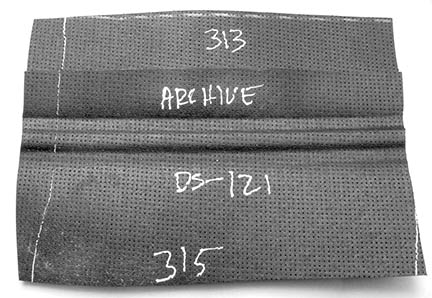 “This material is classified as nonhazardous by the EPA (Environmental Protection Agency) under rules adopted during the Obama administration,” Beasley said. “It has no odor.”

He stressed that the Northampton County site was selected due to its remote nature. The facility, Beasley said, would not be visible from nearby roads; is not the home of any state or federally protected species; does not contain any historic or archaeological sites; and has on-site access by rail.

Beasley and his VistaGreen partner, Clarence Mann of Raleigh, purchased the 804 acres in December 2015.

“”We’ve been putting this plan together since that time,” Beasley said.

The closest residence to the sprawling tract of land is 2,000 feet outside its borders, he noted.

“The site plan now developed is not final,” Beasley said. “Right now there is a 2,000-foot buffer separating the site from the closet home. That is more likely to change in the permitting process, moving the storage areas further in from the properly line, which will increase the buffer area and allow for more distance between the closest home and the storage areas.

“One of the key elements of this particular property is its proximity to the CSX rail line,” Beasley continued. “In our plans is the construction of a spur line off the main rail line so we can have the rail cars containing the material shipped directly onto the property. That drastically reduces the number of trucks on the local roads carrying this material.”

According to a map of the property, as provided by Beasley, the site will contain two storage units (landfills). One is 62 acres while the second covers 157 acres.

Additionally there are six ponds proposed, all placed in strategic locations.

Another important piece of the economic impact is that VistaGreen must apply for and receive a franchise from the Northampton County Board of Commissioners. Beasley said that franchise is basically a “host fee” his company will pay to the county, much like the deal forged decades ago by Republic Waste that pays millions annually to Bertie County local government for the solid waste landfill there.

“Based on expected volume at the two storage facilities, we have calculated payments in excess of $20 million to Northampton County (local government) over a period of 10-to-15 years,” Beasley said.

“It is our hope that with these franchise fees, coupled with the local financial impact this facility will have on the county’s tax base along with creating new jobs, High Bridge Park can, over time, add millions of dollars to the county’s budget to be used for education, first responders and other needs in Northampton County,” he added.

Recycling the material also creates the opportunity for other companies to locate at High Bridge Park, which brings the possibility of more jobs as well as adding to the county’s tax base.

“We start out storing the CCR; it will probably be two to three years (after completion of the storage units) before we start receiving any CCR and then another year before the storage units have any critical mass to speak of,” Beasley noted. “In three or four years, the need could arise to recycle the CCR for its current applied purposes, which include use in making bricks, concrete and asphalt. They are the applied usages today; there could be other uses developed down the road.”

Beasley said he is keenly aware of one major hurdle to clear if the project is approved – public perception of coal ash, particularly the reports of spills at several facilities operated by Duke Energy over recent years. One was three years ago when an underground pipe burst at a Duke Energy steam station north of Greensboro, spilling close to 39,000 tons of coal ash into the Dan River. The toxic sludge spread 70 miles downstream.

As far as the six ponds that are currently designed for construction at the proposed facility, Beasley said they are necessary for capturing storm water run-off and contact surface water. He added those ponds would be lined with the same material used within the two landfills.

“Everything at the facility must be approved and permitted by DEQ (Division of Environmental Quality, a state agency),” Beasley stressed, adding that water samples at the facility are required to be taken on a regular basis and submitted for testing by DEQ.

“There will be monitoring wells located on site and the samples taken from those wells are submitted to the state to confirm that nothing is leaking and the soil and groundwater are not contaminated,” he added.

To date, Beasley said VistaGreen has not entered into any contract to accept CCR from companies that burn coal to produce electricity.

“We first have to gain approval of the special use permit before we can even start talking to any company, whether it be Duke Energy, Dominion Power or whomever, to accept their material,” Beasley said.

“With that you might say we’re taking a big leap of faith,” he added. “But we feel the isolation of this site, the overall size of this tract, the fact that these are lined landfills, and its location along a main rail line makes it very attractable.”

In advance of the Northampton Planning Board meeting in February, Beasley said his company is now in the process of scheduling outreach meetings with the general public, particularly those living in the area of the proposed facility. Beasley said he wants to hold those meetings in Seaboard, perhaps at the Town Hall, and is now attempting to schedule the exact dates and times of those meetings.

Once scheduled, Beasley said he would share that information with this newspaper for publication as well as being available on the company’s website (www.vistagreen1.com).

As part of its outreach effort, Beasley said VistaGreen mailed letters, a map of the property, and a question/answer sheets to all property owners located near High Bridge Park on Jan. 13.