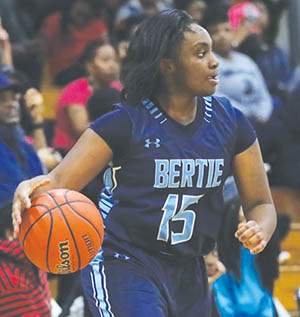 Jomiya Early’s two early three-point baskets and a free throw for Nyasia Barnes staked Bertie to a 7-0 lead.  The Falcon guards continued to penetrate against the home team’s defense.  That added up to a bunch of Bear fouls, leading to Bertie trips to the free throw line.  Bertie made five of ten to up their lead to 13-5.  King then scored the final five points of the first quarter, punctuating it with a big three-pointer just before the buzzer for a 20-5 Bertie lead.

Hertford County could never sustain a run in the second quarter, and the normally steady D.L. Watford was bottled up on the perimeter. The Falcons led by 20 at 28-8 before Regina Woodley got a put back to stop the barrage.  Bertie outscored Hertford County 7-to-4 the rest of the quarter and carried a 22-point lead (34-12) into the locker-room at halftime.

Morings’ pair of lay-ups to open the third quarter helped Bertie open up a 38-16 lead.  King, who has now scored in double figures in 12 straight games continued to shoot well on the Bears’ home floor.  She scored 55 points in two games during the Roanoke-Chowan News-Herald Holiday Classic and her sharp-shooting continued.  She nailed back-to-back jump shots, and with a follow-shot by Morings, the Falcons were ahead 44-16.  The Bears trailed by 34 points, 53-19, after three quarters.

Coach Kelvin Hayes kept his starters in for the early part of the fourth quarter before pulling them for the night.  The Falcon reserves only accounted for five points as Bertie (14-0; 5-0, NCC) took their largest lead at 65-23, and closed it out with a 38-point victory.

Hertford County (1-10; 0-4, NCC) is off until Friday when they travel to First Flight and they play Norfolk Christian on Saturday.  Bertie plays at Pasquotank tonight (Tuesday).