MURFREESBORO – It may have made for great television, but these are the games that give coaches grey hairs.

The game was part of the CIAA’s TV package with AsPire television network and was broadcast live throughout the Southeast.

The Hawks continued their home win streak with the victory, running it to nine wins on Bob Burke Court, as they collected their tenth win of the season. 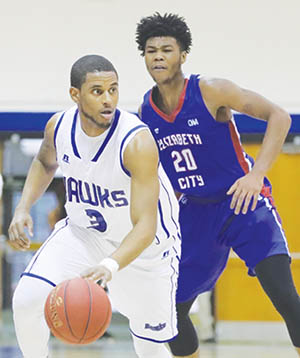 Marco Haskins paced the Hawks with 21 points. Haskins hit for 4-7 from three point land and 8-13 from the floor in the game.  Chowan needed all that firepower after blowing a 15-point lead. The Hawks held off a late comeback by the Vikings to extend their win streak to two in a row.

Along with Haskins’ team-high 21 points, Carlos Arroyo scored 14 points in the win. Joe Goodwin and Jeremy Smith contributed 13 and 12 points respectively.  Smith compiled the games only double-double with 11 rebounds to go with his 12 points.

It was a grand homecoming for former Hertford County High player Jordan Jones.  Jones led the Vikings with 24 points and grabbed nine rebounds while John Maynor scored 16 points in the game.

Arroyo had the hot-hand in the first half, hitting two-of-three from three-point land and collecting 11 points.  Andrew Lopez, in a rare start, hit his first two shots and the scoring barrage led Chowan to an early 10 point lead, 16-6 with fewer than 14 minutes left in the half.  The Hawks built that lead to 15 (29-14) before settling for a 42-29 score at the mid-break.

At halftime Chowan honored the 1987-88 men’s team as a “Team of Distinction” with a plaque presentation by President Dr. Christopher White and Athletics Director Ozzie McFarland.  That year the team finished 28-5 as one of the most successful teams in Chowan’s junior college history under legendary coach Bob Burke, who collected his 200th win that season.

Back to the game, Goodwin’s jumper to open the second half equaled Chowan’s largest lead at 15 before the Vikings started chipping away.  ECSU got the deficit down to eight points four times before Maynor’s three-pointer had the Vikes within five at 50-45.  But a lay-up and free throw by Goodwin, along with a Kevin Kuteyi three-pointer pushed Chowan’s lead back to eleven.  With under three-and-a-half, the Vikings had shot their way back within five on a Jones lay-up; then with less than two minutes to play, a Shyheid Petteway lay-up off a Hawks’ miss had ECSU within three, 73-70.  But the Hawks were patient, and used several free throws late in the game to keep it out of reach for the Vikings and escaped with a two-point win.

Chowan traveled to Winston-Salem on Monday to face Winston-Salem State University in a make-up game from last weekend’s cancelations. They will play another TV game tomorrow (Wednesday), when they travel to Virginia State.

WINDSOR – With eight days between games and no practice, Bertie High’s girls basketball team could be excused for not... read more