AHOSKIE – Hertford County continued their hold on first place in the Northeastern Coastal Conference boy’s basketball race with a 20-point win, 85-65, over Bertie on the Bears’ home floor Friday night.

The Bears were missing their main offensive threat in Jaquarii Roberson, who was out of town on a football recruiting trip, but other Hertford County players stepped up in his stead. Four players scored in double-figures including Talik Totten and Rayshawn Beamon hitting for 21 points each.  Quatravis Riddick of Bertie led all scorers with 24 points. 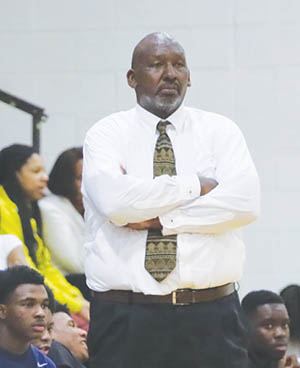 “Several people stepped up for us on the offensive end in place of Jaquarii”, said Hertford County coach Charles Simmons. “We were patient looking for the open man and finishing.”

A Josh Burden three-point basket got Bertie on the scoreboard first as the Falcons took an early 5-2 lead.  But two buckets from Zion Riddick put the Bears on top 6-5.  The game was tied twice in the first quarter and see-sawed back and forth before Totten’s three-point shot put the Bears in front at the end of the period, 15-14.

Hertford County opened the second quarter on a 9-2 run to take a 24-16 lead; but Bertie answered with a run of their own and soon were back within a point, 24-23.  The Falcons stayed close until the final minute and a half of the half when four different Hertford County players scored on a 9-1 run and the Bears carried a 36-27 lead into halftime.

Delmonta Cherry opened the second half with a three pointer and another jump shot for a 41-27 Bear lead before Bertie answered with a three.  But the Falcons went cold from the floor while the Bears heated things up, getting ahead by as many as 17 points, 47-30 before Bertie cut into that bulge.  The Falcons got their deficit down to a dozen, 47-35, before Hertford County went on a run and upped the lead to 20 at 57-37.  It was a 16-point lead at the end of the quarter, 59-43.

Bertie tried to shoot their way back into the game as Riddick drained several three-point shots, the last one getting his team within eight at 61-53.  But the Bears’ lead was too much to overcome.  A 12-to-3 run midway through the final frame pretty much sealed the Falcons’ fate and the Bears went on to ride this one to a 20-point victory.

“We had a great team effort on the offensive and defensive ends,” added Simmons.

Hertford County (7-4; 4-0, NCC) will try to schedule Northwest Halifax later this week; otherwise their next game is at First Flight Friday night.  Bertie is at Pasquotank tonight (Tuesday) and home on Friday to Currituck.