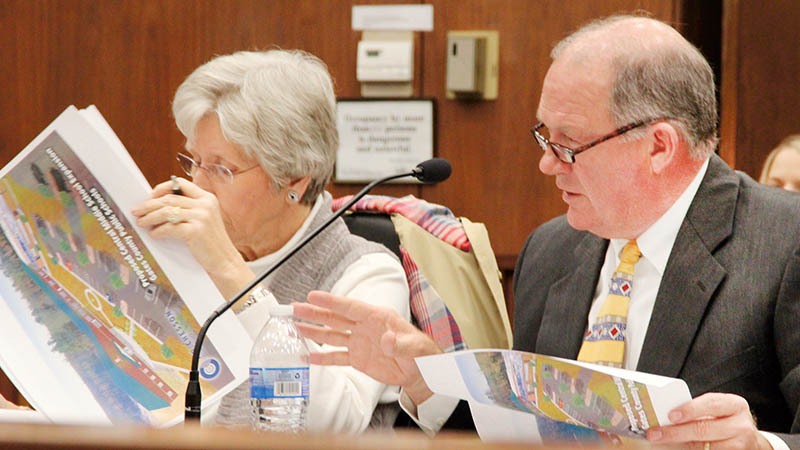 At a meeting held Jan. 4, Jack Owens, vice chairman of the Gates County Board of Commissioners, asks a question about the possibility of replacing/renovating Central Middle School while board chairperson Linda Hofler studies one of the options. | Staff Photos by Cal Bryant

GATESVILLE – “Now we have our homework to do.”

That was the response of Linda Hofler, chairperson of the Gates County Board of Commissioners, as she spoke on behalf of her colleagues after receiving options from the county’s Board of Education that address ongoing issues at an aging Central Middle School.

This comes on the heels of the Gates County voters defeating a referendum on the November ballot that called for a hike in property taxes to pay for building an entirely new Central Middle School at a cost of $16 million.

However, the issue remains that the school, built in 1957 (with later additions) needs immediate attention due to age and current condition.

Dr. Barry Williams, Superintendent of Gates County Public Schools, addressed that issue during last week’s meeting of the board of commissioners.

Williams presented the commissioners with three options: (#1) renovation of the 1957 and 1967 buildings; (#2) demolish the 1957 building and replace with a new building, and renovate the 1967 building; and (#3) replace the roof, the HVAC systems and windows for both the 1957 and ’67 buildings.

He added the options are through a proposal from A.R. Chesson Construction Company. Williams stressed that the costs associated with all three options are estimates.

Option one comes at a projected cost of $15.3 million, which includes design fees, room furnishings, making all bathrooms ADA compliant, all new HVAC systems for the 1997 building, and parking lot expansion.

The downside to option one is it maintains the current footprint of the school, meaning the continued need for classroom trailers. It also cites the need for temporary trailers to be used for classrooms and offices during the estimated 18-month construction period. This comes at a cost of $500,000 with no return on that investment. 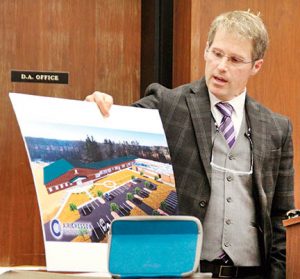 Option two is a shade over $12 million. It includes the following:

The complete renovation of the 1967 building (to be accomplished during summer to not impact school year);

A complete demolition of the 1957 building to make room for parking lot expansion (Williams noted that an expanded parking lot allows for better student drop off and pick up arrangements);

The addition of a sprinkler system and enlarge the domestic water service.

The cost covers all design fees and room furnishings.

This option, which will increase the size of the school by 12,000 square feet, will bring the buildings up to ADA requirements, as well as meeting current building codes and thermal energy requirements.

Williams said the design period for option two will take nine months with a 14-month period for new construction.

Option three comes with an estimated price tag of $5.5 million. That work includes removal of existing roof systems on 1957 and 1967 buildings and replaced with new sloped metal roof framing and panels on the lower building areas; a new membrane roof on the gymnasium; replacement of the HVAC system as all mechanical systems are impacted by the roof change; and changing all windows with thermal insulated glass such that the mechanical system is sized appropriately.

However, Williams pointed out that it is unknown at this time if the existing walls are capable to support the sloped roof system.

“All signs point to option number two as the clear choice,” Williams told the commissioners. “From talking to Mr. Chesson, even if we acted right now, under the best case scenario our ongoing issues at the school will continue to plague us for at least another two years.”

Those issues, as well documented by school officials over the past few years – facts now supported by A.R. Chesson officials – include mold, roof leaks that have led to falling ceiling tiles, no ADA compliant restrooms, possible lead contamination, and bad water pipes and electrical systems.

In an effort to provide a wider scope of the work needed to be performed at the school, Williams provided the commissioners with a set of three options as provided by Pinnacle Architecture.

The Superintendent ruled against option one that called for renovating the existing building to include re-roofing or total roof replacement. Williams said that option is not viable due to excessive costs. He did not provide that cost estimate.

Option two is to demolish and reconstruct the administration, 8th grade wing, gymnasium, and renovate the 7th grade wing.

The existing seventh grade wing will be renovated. It may include an upgraded HVAC system, floor coverings, lighting, windows and doors. The existing sixth, seventh grades areas along with the cafeteria will be painted.

Pinnacle estimates the cost for option two at a shade under $8 million.

Option three comes at a projected price tag of $8.95 million. It includes the demolition of the current administration, 8th grade wing, gymnasium, and 7th grade wing, leaving existing 6th grade wing and cafeteria, and kitchen area. Additionally, the existing cafeteria will be utilized.

The existing sixth grade area along with the cafeteria will be painted.

As far as financing any of the options, Williams said interest-free loans are available through Qualified School Construction Bonds (used for new construction) as well as Qualified Zone Academy Bonds (use is restricted only for renovation projects).

Upon earlier approval by the commissioners, the county had secured $6 million in Qualified School Construction Bonds through the North Carolina Department of Public Instruction, contingent upon the outcome of the voter referendum in November.

Despite the defeat of that measure, Williams said he has been in contact with Dr. Ben Matthews from the NC Department of Public Instruction and has a commitment from him that the $6 million remains available through Jan. 31 of this year.

“I was also in contact with Dr. Matthews over the Christmas holiday and he told me all I had to do was to come to Raleigh, fill out some paperwork and he will approve $5 million in Qualified Zone Academy Bonds without going through an interview with a committee,” Williams noted. “That’s on top of the $6 million. We can use both of those, one for renovation and the other for new construction.”

Again, Williams stood behind option two from A.R. Chesson. The new construction adds seven classrooms to existing footprint of the school, with a total student capacity of 500.

Some of the savings realized in option two comes through not building any new athletic fields, to include a track, lights and bleachers.

“It will take us some time (to study all the options as presented), so when you include the formal bid process, you’re talking about 60 to 90 days,” said Jordan, referencing the Jan. 31 deadline on making a commitment to obtaining one or both construction/renovation bonds.

“From speaking with Dr. Matthews, I think if he knows that the county is serious about approving the recommended option, then I think he’ll give us some leeway with that deadline,” Williams said.

“Then if we put out a request for bids, then that might suffice that we are serious about this,” remarked Commission vice chairman Jack Owens.

“There’s a lot of things that have to come together, to include our property tax rate in a reevaluation year,” stressed Hofler.

Owens stated he felt a special meeting of the commissioners was needed due to the time-sensitive nature of the bond. The board agreed to meet at 5 p.m. on Jan. 11 to further discuss the multiple options presented by Williams as well as how the county’s financial coffers will be impacted by moving forward on this project.