WINDSOR – Bertie fell into a hole early and were never able to climb out as 4A power Greenville J.H. Rose downed the 2A Falcons, 69-45, here Thursday night.

Eight players contributed for Bertie, but it wasn’t enough as Rose jumped out to an early lead and never looked back.

“If we make the right pass and make the right read at the right moment, then things change for us in the first-half,” said first-year Falcons coach Derrick Bond. “The idea was there, we just didn’t have the rotation.” 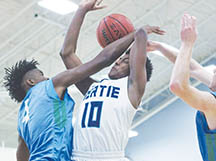 With East Carolina University basketball coach Jeff Lebo on hand in the stands to watch his son, Creighton, play, Rose jumped out to a 6-0 lead to open the game. Jaqwan Baylor scored in the low-post to get Bertie on the scoreboard, but the Falcons were then outscored 12-to-2 as Rose upped their lead to 18-4.  Jamari White sank two free throws and Burden got a steal and lay-up, but the Falcons still trailed 20-8 after the first quarter.

Rose went five minutes before scoring another field goal from the floor in the second quarter.  In the meantime, the Rampants went eight-of-12 from the foul line in outscoring Bertie 8-to-2.  Cottle broke the Bertie drought with a three-pointer and Burden added another, but Rose kept up the pressure – especially on the offensive backboards – and led by a dozen, 36-24, at halftime.

Rose opened the second half on a 9-0 run, still shooting at a blistering pace. Once again, a triple from Cottle quieted the Greenville crowd.  A 9-0 Bertie run brought the Rose lead down to 45-31.  The Falcons got seven of the quarter’s last nine points but were still trailing by a dozen 48-36 headed to the final frame.

Erik Speight started to heat up for Bertie in the fourth as Rose coach and Colerain native James Rankins began to clear his bench.  After Cottle hit his final three-pointer of the night, Rose got a garbage bucket to close out a 24-point win.

“I like where we are,” said Bond. “We just need a little better execution.”

After Friday’s Hertford County game (not complete at press-time), Bertie (3-10; 2-2, NEC) continues conference play with Pasquotank on the road Tuesday and Currituck at home next Friday.