MURFREESBORO – Call this one a “fun” game.

Eleven different Hawks scored in Coach Brett Vincent’s spread offense as Joe Goodwin paced the squad with 21 points in Chowan’s ninth win of the season.  Once again, the Hawks “protected the house” as Chowan maintained their unbeaten home streak, running it to eight wins on their home court.

“I like the effort I’m seeing out of our guys,” said Vincent after the game. “They’re really playing hard.”

Chowan had not seen action on the hardwoods in six days due to the postponement of a pair of Central Intercollegiate Athletic Association (CIAA) cross-divisional road games against Winston-Salem State and Livingstone; and they had not played at home since a 79-67 triumph over Lenoir-Rhyne on Dec. 30. 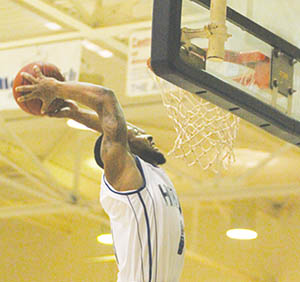 Chowan’s Jeremy Smith winds up for a tremendous thunder-dunk in Wednesday’s game with Salem International. Smith finished with 17 points as the Hawks won in a rout, 98-65. | Photo by Qui’Wania Miller

Wednesday night Chowan caught fire in the first half, hitting 69 percent (20-29) from the floor.  Meanwhile, their defense and rebounding held the Tigers to 9-19 shooting (47 percent).  Chowan only missed nine shots in the half – Salem International only made nine.

“I thought we shot the ball really well,” added Vincent.

The Hawks picked up 19 points off of forced turnovers in the first half alone and out-rebounded the Tigers 15-6 under the boards to take a 57-31 lead into halftime led by Kevin Kuteyi’s 15 points.

Chowan’s hot hand continued through the second half, hitting 35-65 from the floor to finish the game hitting shots at a 54 percent clip. The Hawks spread their lead to as many as 38 points in the second half.  Chowan battled under the boards, out-rebounding the Tigers 42 to 24 in the win.

The Hawks tied their highest point total of the season with tonight’s 98-65 win; equaling their 98-67 effort against Mid-Atlantic Christian in their season opener.

Along with Goodwin’s game-high 21 points, Jeremy Smith scored 17 points and grabbed nine rebounds. Kuteyi netted 15 points – all in the first half – and dished out three assists and three steals.

The Hawks will hit the floor again today (Saturday) Jan. 14, as they host Elizabeth City State University in the first CIAA North Division game of the year. The game will be televised on the Aspire Network both regionally and nationally.   Tip-off is slated for 4:05 p.m. at the Helms Center.

“It should be an exciting game now that the students are back and we have a chance to pack this place,” mused Vincent. “It’ll be a really wild atmosphere, but we need to come out on top.”

WINDSOR – Bertie fell into a hole early and were never able to climb out as 4A power Greenville J.H.... read more