WINDSOR – With eight days between games and no practice, Bertie High’s girls basketball team could be excused for not putting their best effort on the floor.

In what wasn’t one of their “masterpieces”, the Lady Falcons still had enough oomph to dispatch 4A Greenville J.H. Rose here Thursday night 53-35.  Bertie, ranked number-one in the NCPreps.com poll, remained perfect as they upped their record to 13-0 with the win.

“Sometimes we get comfortable and relax too much,” said coach Kelvin Hayes. “That’s something we’re going to have to work on in practice. Still, a win is still a win.” 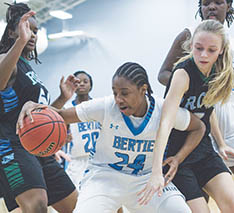 Akyia King led the Lady Falcons’ scoring with 17 points while Autum Morings added a dozen and 11 for Nyasia Barnes.  CaStar Braswell led the Lady Rampants with 15.

With Rose misfiring, thanks to Bertie’s defense, the home team used their spread offense to roar out to a 9-2 lead in the early going.  The Falcons then began to bomb from the outside, hitting three three-point shots in a row, staggering the Rampants in their wake, and upping their lead to 20-5.  Rose got a little bit back and trailed 20-9 after the first period.

King was able to penetrate in Rose interior starting the second quarter and scored four quick points for a 24-9 margin.   The Rampants answered with a pair of triples and a put back to get within seven at 24-17. But Rose was blanked the rest of the period as Morings converted a couple of steals and lay-ups and led a 10-0 Bertie effort that had the Falcons ahead 34-17 at the mid-break.

Carlisa Spivey – who had been silent in the first half – helped spark Bertie in the third quarter; as she, King, and Morings helped Bertie to a 20-point lead, 44-24. It was an 18-point margin when Jomiya Early converted an old-fashioned three-point play that made it 47-26 headed to the fourth.

Deep in a scoring hole, Rose could only foul in the last period, but Bertie couldn’t put the visitors away, going just four-for-ten from the foul line.  Despite the sloppy and sometimes lethargic play, the 2A Falcons had plenty to crush the 4A Rampants as Bertie won in a romp.

“A little rusty, but hopefully we’ll get back into it,” concluded Hayes.

Bertie (13-0; 4-0, NCC) played Hertford County Friday in a game not done by press-time.  They’ll continue on the road Tuesday night with a game at Pasquotank.

MURFREESBORO – Call this one a “fun” game. All thirteen Chowan University men’s basketball players who dressed out for Wednesday’s... read more