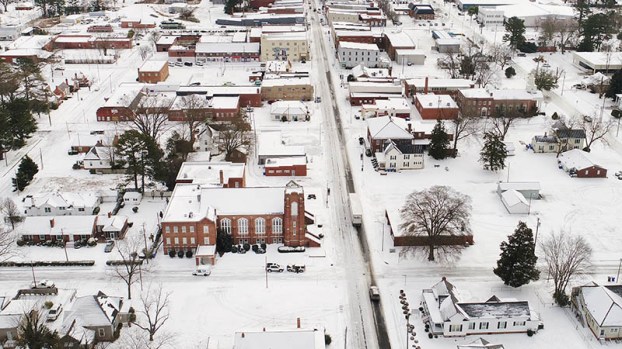 Shown here is a bird’s eye view of downtown Ahoskie, looking east with Main Street in the center, covered in snow and ice on the heels of Saturday’s storm. Sub-freezing temperatures on Monday kept the snow/ice in place. | Photo by Prince Edwards

It was a “balmy” 29 degrees on Monday, but nowhere close to the warmth needed from Mother Nature to begin the melting process from Saturday’s round of winter weather.

It wasn’t as bad as initially forecasted, but despite lesser amounts of snowfall, local roadways remain treacherous in the aftermath of a winter storm.

First Sgt. Mike Warren of the North Carolina Highway Patrol’s Troop A / District II office in Ahoskie said the main roads within his district (Bertie, Gates and Hertford) have been cleared except for certain “slick spots.”

“Our secondary roads, however, are still not cleared,” Warren stated on Monday afternoon. “The Highway Patrol warns all motorists, please, unless you absolutely must travel, do not drive. Stay home. We especially don’t want joy-riders slipping and sliding out on our roadways potentially causing accidents.”

There are reports of up to six inches of snow in the western sections of Northampton County. That is roughly twice as much as what fell from the skies over the remainder of the Roanoke-Chowan area.

“We’ve had about two, maybe three inches of snow here,” said Ahoskie Police Chief Troy Fitzhugh. “We had mostly sleet overnight Friday and into the morning hours of Saturday before turning to all snow.”

As of Monday afternoon, DOT crews had done a good job with clearing US 13 in and out of Ahoskie, but the town’s streets remained covered with snow.

That was the same case on the majority of secondary roads in the county, as well as some slick spots along NC 11 and NC 561. That led officials with Hertford County Public Schools to cancel classes for students and staff again today (Tuesday).

Northampton County Emergency Management Director Ronnie Storey also reported sleet at the outset of the storm, but it quickly changed over to snow, especially in the western and far northern areas of the county.

The National Weather Service office in Wakefield, VA released a map on its website showing a band of heavy snow (9-12 inches) stretching northward from the western tip of Northampton County to Emporia, VA through Wakefield to Williamsburg and to the Virginia Eastern Shore and lower Eastern Shore of Maryland. Since the snow mixed with sleet and some rain in northeast North Carolina, to include the majority of the Roanoke-Chowan area, only 1 to 3 inches of snow fell there, with higher amounts across Northampton and Halifax counties.

“In a weather briefing I had Saturday morning with officials in Raleigh, I learned there was a warm pocket of air that infiltrated the system, which prolonged the time period of sleet on the eastern end of our county and over in parts of Bertie and Hertford County,” Storey said.

Still, the roads in Northampton are a mess.

“DOT is working to clear the roads, but it’s going to be a slow process due to temperatures not expected to rise above freezing until Tuesday,” Storey noted.

Work crews from the N.C. Department of Transportation are continuing to work in the central and northeastern portion of the state to clear ice and snow from roads, bridges and overpasses.

Crews in Division 1, which includes 14 counties in the northeast (including Bertie, Gates, Hertford and Northampton), are continuing de-icing operations through mid-week.

“While we have been diligently working to clear primary roads, secondary routes may still be covered in ice or snow,” Division 1 Engineer Jerry Jennings said. “We urge all drivers to avoid travel if possible. If you must venture out, drive slowly and leave plenty of space between you and other vehicles.”

Jennings stated that plans call for the majority of all roads within Division One to be clear of snow and ice by late Tuesday or Wednesday morning.

In Bertie County, where sleet dominated the precipitation, a few minor traffic accidents due to road conditions were the primary mishaps, according County Emergency Services Director Mitch Cooper on Monday.

Cooper says his crews were called out to two roadway accidents on US 17 North Bypass in Windsor and another on Ashland Church Road.

“The county received about one-inch of snow, but most of the precipitation we got was from sleet,” Cooper said on Monday. “Because of that, roads iced over very quickly and travel on the roads was very hazardous.”

Cooper said NC Department of Transportation reported to him that the main roadways in the county, primarily US 13, US 17, NC 45, NC 42, NC 11, and NC 305 had been cleared as of Monday noon. He stated there were some icy spots reported on NC 308.

“The biggest concern in on the back roads, because according to what we’ve seen and heard most of them haven’t been touched,” Cooper added.

The EMS Director further stated that he hoped most of the secondary roads would be cleared by late Wednesday or on Thursday when the cold snap was due to break, signaling a warming trend.

“Our biggest challenge now is keeping our equipment ready because since our station (in Windsor) flooded back in October during Hurricane Matthew we’ve had to keep it outside,” Cooper noted.

Cooper said he had not heard anything on whether Bertie County Schools – closed on Monday for students and staff – would remain closed for a second day today (Tuesday).

“Based on what we’ve told them, I think they should be (closed),” he stated.

He said his EMS crews had answered all their routine calls.  Despite the weather, Cooper said nothing had hindered his crews’ responses.

Temperatures were not expected to reach above freezing until later this week, which has also made clearing snow and ice from county sidewalks and buildings challenging.

The Bertie County Sheriff’s Office joined with Emergency Services in asking that county staff and citizens refrain from unnecessary travel out of an abundance of caution.

Republic Services, which operates the county’s Refuse Convenience sites, were closed on Monday, and there was no word on if they would re-open on Tuesday.

County Manager Scott Sauer’s office said his staff was assessing the possibility of opening on Tuesday, and more information will be shared through local media and on the county’s Facebook page once the assessment was completed.

After two straight days of sub-freezing temperatures (including a report of 2 degrees early Monday morning), the thermometer is expected to significantly rebound on Tuesday.

The National Weather Service office in Wakefield, VA is calling for highs on Tuesday in the mid 40’s and a low of 38 degrees. It will warm into the mid 50’s on Wednesday, under cloudy skies.

Expect partly to mostly sunny skies later in the work week where the highs are projected in the upper 60’s and lows in the upper 40’s.

AHOSKIE – He has battled wildfires from coast to coast; walked behind a plow with the heat and smoke... read more