In what started earlier this week as a routine outbreak of frozen precipitation has turned into a massive snowstorm….at least by northeastern North Carolina standards.

Winter Storm Helena, a moisture-heavy low pressure system, is expected to move up the coast on Friday, basically at the same time the cold air arrives from the west. The resulting scenario has weather forecasters predicting anywhere between eight to 12 inches of snow for the Roanoke-Chowan area as well as the majority of central and eastern North Carolina and southside Virginia. 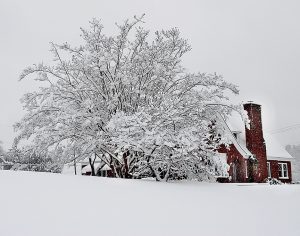 This photo, taken in late December of 2010, shows 12 inches of snow that fell in Ahoskie. Weather forecasters are saying a similar storm is shaping up to impact the local area and the entire region on Friday night into Saturday. File Photo

One forecast model on Thursday showed Ahoskie receiving over 14 inches of snow. If that occurs, it will mark the biggest snowfall since the Dec. 26, 2010 storm left a foot of “white” blanketing the local area.

Meanwhile, the National Weather Service office in Wakefield, VA on Thursday afternoon was predicting five to nine inches of snow across the R-C region. They are expecting the snow to begin by midnight Friday and ending Saturday evening. During that stretch, NWS officials added that the winds will be stiff – coming in from the north at 10 to 20 mph. Higher winds (15 to 25 mph with gusts up to 35 mph) are forecasted along the immediate coast.

Whatever amount of snow does fall, don’t expect it to go away quickly. High temperatures on Sunday and Monday will not get above the freezing mark, despite ample sunshine on both days. Sunday’s low is forecasted at 5 degrees.

Crews from the N.C. Department of Transportation are preparing the state’s roads, bridges and overpasses.

In Division 1, which includes 14 counties in the northeastern portion of the state, crews are applying brine to the division’s major highways and secondary roads, which include U.S. 64, U.S. 158 and U.S. 17. Staff will also monitor conditions on several high-rise bridges, as well as spots along N.C. 12 known to be prone to ocean over-wash.

“Our preparation activities are currently underway now and will continue into the morning,” Division One engineer Jerry Jennings said on Thursday. “Our crews are using all of the tools and materials at our disposal to prepare for any significant weather that may come.”

In anticipation of the incoming winter weather, the Highway Patrol is requesting motorists to use caution when traveling throughout several portions of North Carolina. Driving conditions could possibly deteriorate over the weekend, as snowfall is projected to accumulate due to plunging temperatures.

The NCHP says if you must travel, allow yourself more time and to expect delays. Driving at a lower speed enables the ability to stop and allows for greater reaction time if approaching hazards within the roadway.

Increase distance between vehicles – it takes significantly longer to stop on snow covered or icy roadways.

Clear all windows on your vehicle prior to travel – having unobstructed vision is vital to avoid running off of the road or becoming involved in a collision.

Use caution on bridges and overpasses as they susceptible to freezing before roadways.

To get out of a skid – lightly take your foot off the brake or gas and try to regain traction. Always look and steer where you want to go.

Keep an emergency kit in your vehicle. Include an ice scraper, kitty litter or sand for traction, jumper cables, cell phone with a car charger, blankets, gloves, hats, food, water and any needed medications. Be sure to bundle up with a winter coat, boots, gloves and a hat in case you get stranded.

Avoid using cruise control as it can cause the vehicle’s wheels to continue turning on a slippery surface when speed needs to be decreased.

Ensure that your vehicle has a full tank of gas in the event you are stranded for an extended period of time. Charge your cellular phone prior to departure and take a blanket along.

Notify a family member or a friend of your travel plans prior to departure – if you travel is interrupted, someone will know.

If involved in a collision, NCHP officials advise that the winter weather also limits first responders and increases response time.

Attempt to move your vehicle out of the roadway if you are involved in a minor, non-injury traffic collision; especially if you are in a dangerous area such as a curve or a blind hill.

If you find yourself stranded, stay with your vehicle. Motorists who leave their vehicle attempting to obtain assistance could easily succumb to the freezing temperatures.

To check the status of road conditions, motorists are asked to go to the Department of Transportation’s website at https://www.ncdot.gov/travel/. Officials are requesting the public to dial 911 and *HP for emergency purposes only.

The AAA of the Carolinas said the following tips can help homeowners during winter weather:

Stock up on essentials and emergency items – In case of loss of power or impassable roads, be sure to have several flashlights with batteries, a battery-powered radio and a car charger for your cell phone.

Trim tree branches in your yard – Before the storm approaches, trim tree limbs that hang over power lines.

If loss of power occurs, avoid opening the refrigerator and freezer as much as possible to keep the temperature lower for a longer period of time. Unplug all appliances and leave only one light on to prevent a power surge.

Prevent pipes from freezing and bursting – Keep your home heated to a minimum of 65 degrees, open faucets enough to let them drip slowly and disconnect hoses from outside spigots. If pipes freeze, thaw them immediately or contact a plumber for assistance. Most homeowners’ insurance policies cover damage resulting from a freeze, but check your policy to make sure.

PENDLETON – A 57-year-old Pendleton man sits in jail without the privilege of bond following his arrest on Monday on... read more