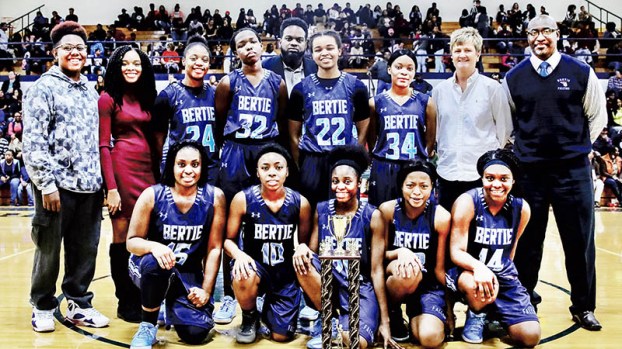 The beat goes on for the Lady Falcons of Bertie High School as the team captured their 16th title in the past 18 years of the Roanoke-Chowan News-Herald Holiday Classic. Bertie, shown here posing with the championship trophy and joined by their first-year head coach Kelvin Hayes (back row, right), routed Plymouth, 65-23, in last Thursday’s title game. | Dynamic Photos / William Anthony

AHOSKIE – Their coaches and players will tell you this never gets old.

For the 16th time in the last 18 years, the Bertie High School girl’s basketball team captured the Roanoke-Chowan News-Herald Holiday Classic championship.  The Lady Falcons also won their 11th game of the season with the 65-23 triumph over Plymouth.

The 2016 final was a replay of the two combatants who met in the 2015 final.  And while the end result was the same, this time Plymouth center Brittany Franklin did not factor significantly in the outcome.

Deadlocked at 12-12 following the end of the first quarter, Bertie turned up the heat white-hot by breaking the Lady Vikings’ zone defense thanks to keen, deadly outside shooting in the second.  When the dust settled at halftime, Bertie had outscored Plymouth 28-to-2.  In that period, NyAsia Barnes made three of four three-point field goal attempts; and Akyia King – en route to Tournament MVP honors – finished the night with a season-high 29 points

“NyAsia had been struggling with her jump shot, but once she started hitting and King started hitting, everything came together,” said a jubilant Bertie coach Kelvin Hayes. “Defensively we were really strong, and that’s what got us into the running game.” 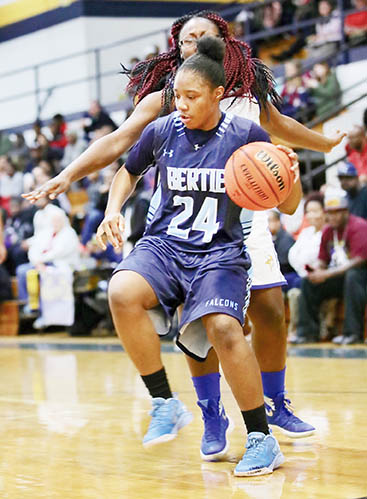 It was Barnes and King that broke a 2-2 deadlock early in the contest thanks to a 7-0 Bertie run that had the Falcons ahead 9-2.  Plymouth chipped away, however, with their zone defense capping Bertie’s outside shooting.  Then with Bertie nursing a two-point lead, 12-10, late in the period, Franklin made a turnaround “sky-hook” shot in the lane right before the buzzer to knot the game at 12-all after one.

But then came the Plymouth drought.

Bertie began bombing away from the outside thanks to Barnes and King – but Plymouth refused to come out of their zone.  With it packed so tight, Bertie’s shooters were free on the perimeter and they made the most of it, draining six of seven long-range bombs, including five in a row. With just over a minute-and-a-half remaining in the quarter, Franklin got a lay-up to break the Viking drought, but the halftime scoreboard read: Bertie-40, Plymouth-14.

Comfortably ahead starting the second half, Bertie then went to their “bread-and-butter” – their trapping defense.  Not only was their strategy effective, but doubling down on Franklin on defense got the six-seven center into foul trouble: picking up her fourth early in the third.  King scored 12 of Bertie’s first 14 points in the quarter on five-of-seven shooting from the field and she also added a pair of free throws.  Once more, Plymouth’s offense was in the deep freeze: not scoring until there was 3:35 left in the period, and that was on a foul shot.  Bertie was ahead 58-17 entering the fourth quarter.

Hayes removed his starters one-by-one in the final frame to cheers and applause from the Falcon faithful that filled the stands behind the Bertie bench.  The officials allowed the game-clock to run in the closing minutes out of sportsmanship with the ladies in blue comfortably in command.

Jomiya Early, Autum Morings, and Barnes joined King as Bertie members of the All-Tournament team; while Franklin and Mauricia Wrighton made the team for Plymouth, who suffered their first loss of the season.

“This gives us an idea of how aggressive we can play when we’re expecting something big,” concluded Hayes.

AHOSKIE – You knew it was coming, the question was when. Hertford County High’s girl’s basketball team finally broke through... read more