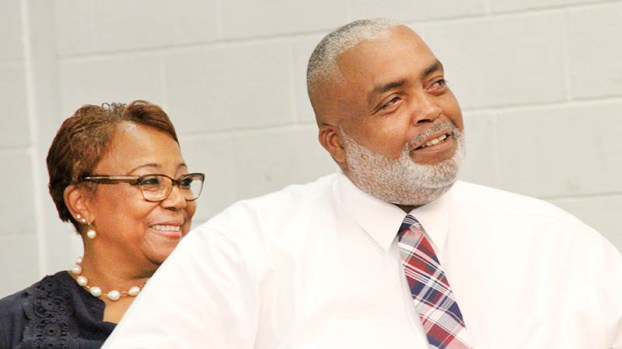 Retiring Hertford County Sheriff Juan Vaughan and his wife, Gail, listen as numerous individuals filed to the podium on Sept. 23 to praise his 35-year career in law enforcement. | File Photo by Cal Bryant

WINTON – When he raised his right hand in February of 1991 and took an oath “to serve and protect,” it never crossed Juan Vaughan’s mind that his ensuing law enforcement career would span 35 years.

As a rookie deputy at that time under the now late Sheriff James Baker, Vaughan stood then on the bottom rung of a nine-man staff.

Now, 35 years and seven months later, Vaughan stands at the top of the pecking order as Sheriff of Hertford County. He has served four consecutive full, four-year terms in that capacity and is currently in the middle of term number five. However, he has opted to choose an early retirement, deciding to end his law enforcement career on Oct. 1. His last day on the job was Sept. 25.

“I’m at the stage of my life when a man begins to count all the blessings he has and I can honestly say that I’m a very blessed man,” Vaughan said on Sept. 6, just hours after formally handing a letter of retirement to the Hertford County Board of Commissioners at their regularly scheduled meeting that morning.

“I’ve still got my health; I’ve never been hurt in this job….that’s a lot to be thankful for and I want use whatever time left the good Lord has for me on this earth to be with the ones I love the most – my family,” he added. “My family is the biggest reason I’ve decided to hang up my gun and badge and retire.”

As it is with all law enforcement officers, they never know exactly what each day will hold.

“When I get a call to go out at night, my wife (Gail) will walk me to the door and tell me she loves me,” said Vaughan, his voice crackling with emotion. “I know she had to spend a lot of sleepless nights, hoping and praying I would come home unharmed. Gail is such a blessing to me, and perhaps part of my decision to retire early is to pay her back for all she had to go through for me.”

Vaughan, a native of Mapleton, graduated from Murfreesboro High School in 1977 and was offered a basketball scholarship to attend Fayetteville State University. He played for only one season at FSU, deciding to concentrate fully on his academics and he graduated with a Bachelor of Science Degree in Business Administration.

“I came back home at that point with no concrete plan of action,” he said. “Then I thought about law enforcement and decided to give that career field a try. Sheriff Baker believed in me and hired me. Then the best thing happened to me that could happen….I had Wesley Liverman, Joe Twine and Ronnie Stallings – three legendary figures in law enforcement in our county – to train me. It doesn’t get any better than that.”

He left the Sheriff’s Office in 1988 for a job with the North Carolina Department of Corrections. In 1997 when then Sheriff Winfred Hardy announced his early retirement. Vaughan applied for the position and was appointed to fill Hardy’s unexpired term. He was first sworn in as Sheriff on Jan. 1, 1998 and went on to win four subsequent elections, all unopposed.

“Eighteen years as Sheriff of the county where I was born and raised is something I’m mighty proud of,” Vaughan smiled. “My plan since Jan. 1, 1988 was to retire as Sheriff and to do all I could do to serve and protect the citizens of the county that you love. I feel I’ve done exactly that.

“It’s like I said before….I’m a blessed man,” Vaughan continued. “I can attribute that to my late mother, Hollie Vaughan. “When I first got into law enforcement she told me to stop and pray each and every morning and the Lord would take care of me.”

Over the years, Vaughan has watched law enforcement grow, both in manpower and technology.

“Now I oversee a staff of 55 employees, to include 21 deputies, the clerical staff and the detention officers, plus Animal Control,” he said. “I have to ensure that everyone under my control is up-to-date on the latest training and certification.

“I want to thank my entire staff for all they meant to me over my career; without them there is no Sheriff Juan Vaughan,” he added. “I appreciate their work.”

When asked about the most gratifying cases he has help to solve over the years, Vaughan said several come to mind.

“I feel at the top of that list was the case where the two elderly women from Virginia were found murdered just outside of Murfreesboro in August of 2004,” he recalled. “We worked that case hard. It took 22 long months, but we solved it.

“Any murder case gets under my skin; a life is lost; family members lose a loved one….those cases are hard on everyone, including us in law enforcement trying to put together what feels like a thousand puzzle pieces in order to solve those cases and help those innocent families gain some type of closure,” he added.

Vaughan also credited another source of his long-term success.

“The citizens of Hertford County have been so good to me and my family for a long, long time,” he stressed. “I thank those citizens for their support, and for their phone calls in providing us with tips that have helped to solve multiple cases over the years. I’m very proud of the relationship my office has built with the citizens.”

As far as his immediate plans for the future, Vaughan promised not to go home and just sit around.

“I feel I’m too young to fully retire; so you’ll see me land somewhere, just not in law enforcement,” he said. “Hopefully I’ll get to play some more golf, but then again that depends on how long Gail’s ‘honey-do’ list has grown over the years.”

Before the end of September, the county’s board of commissioners selected one of Vaughan’s veteran officers, Dexter Hayes, to fill the seat of Sheriff.

As it turns out, Floyd has a son. His name is Matthew. Hurricane Floyd in 1999 has long served as... read more