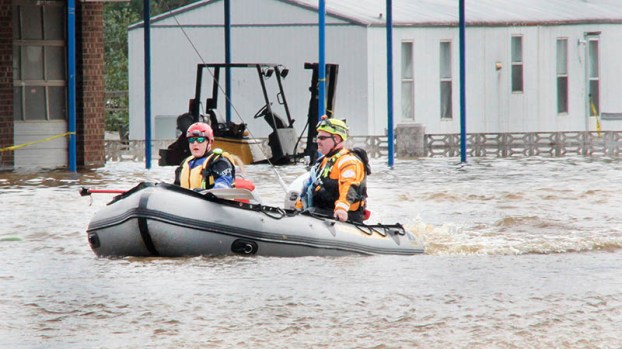 A swift water rescue team from Henderson County performed a house-to-house search on Oct. 9 for residents wishing to escape the rising floodwaters in a neighborhood located off US 13 south of Ahoskie. | File Photo by Cal Bryant

As it turns out, Floyd has a son. His name is Matthew.

Hurricane Floyd in 1999 has long served as the measuring stick locally when tropical systems pay a visit and dump buckets of rain across the Roanoke-Chowan region.

It appears in the wake of the flooding rains and heavy winds this past weekend, Hurricane Matthew will go down in history of coming close to matching Floyd’s fury.

“Matthew is at Floyd’s level, perhaps worse,” said Hertford County Emergency Management Director Chris Smith as he was surveying damage in the aftermath of the rain-soaked tropical system whose full force was felt on Oct. 8. “I’ve actually seen water in places from Matthew that I didn’t see during Hurricane Floyd.”

Smith said the county’s typical low-lying areas suffered from flash flooding during and just after the storm, that dumped eight to ten inches of rain.

The R-C area and most all of northeastern North Carolina were expecting only a glancing blow from Matthew. But all that changed when the hurricane traveled further northward than expected along the ‘Carolina coast before turning out to sea.

In his wake, Matthew left the Town of Harrellsville on a proverbial island. Flooding on NC 45 and NC 561 as well as the Quebec Road, all of which funnel traffic in and out of Harrellsville, cut the town off from the rest of the county. Several boat loads of supplies needed for Harrellsville residents were ferried across a flooded section of NC 45 near the Wiccacon River bridge.

Meanwhile, other parts of Hertford County suffered severe flooding, so much to the point that water rescues were performed.

Smith stated those rescues/evacuations were performed in the areas of the Wiccacon River, near the Meherrin River at Leisure Shores (Marshall Drive and Morgan Drive) off Ebo Road, and in a flooded neighborhood off US 13 south of Ahoskie, to include DT Road.

Additionally, rescues of motorists stranded by the fast rising waters were performed by the Hertford County Sheriff’s Office on Saludia Hall Road, and by the Murfreesboro Fire Department (on Pinetops Road).

Two days after the storm there were 30 roads in the county that remained impassable due to floodwaters and/or washouts. One of the biggest washouts was on River Road at Hare’s Millpond.

Smith said the Ahoskie Creek also impacted its namesake as damage occurred to businesses along NC 42 in the town. The town’s amphitheater, park and ballfields were under water after the creek crested at 15.74 feet.

The Potecasi Creek rose to over 27 feet, forcing the closure of the NC 11 bridge (Ahoskie-Murfreesboro highway).  That creek was also to blame for damage to Beechwood Country Club as well as flooding of residential property there.

Bertie County was hit hard once again, this time with upwards to 12 inches of rain from Hurricane Matthew.

“That’s an incredible amount of rain, and it came with our ground still trying to dry out from up to 17 inches of rain that fell in parts of our county back in late September,” Trent added.

Trent said 26 roads in the county were closed as of Oct. 9, to include NC 305 north of Windsor, Quebec Road, Hexlena Road, Harrells Siding Road, School Road, and Exter Road. He added that DOT was marking those roads and placing barricades as quickly as possible.

Water rescues were performed across the county on Oct. 8. Trent said teams were sent in to the Longbranch community in Colerain, along the canal in Aulander, and in Windsor to pick up people stranded in their homes, which were surrounded by rising water.

Like the rest of the R-C area, Gates County also experienced major flooding from Matthew. One life was lost when Thomas Elliott Saunders, 75, of Sunbury was found inside his pick up truck on the morning of Oct. 10, after his vehicle was swept off the road one day earlier by floodwaters crossing NC 32.

“From what we’ve been able to determine, Mr. Saunders drove his truck into a flooded area on the road,” Jones said. “The water at that time was moving fairly rapidly across the road, which swept the truck off the right side of the road, submerging it in deeper water. The truck overturned, trapping Mr. Saunders inside.”

Jones added it is believed the accident took place at 1 a.m. Sunday because that was the last “ping” recorded on a cellular transmission tower from a phone in Saunders possession.

In Northampton County, nine inches of rain fell causing flash flooding along roads and at residences and businesses in low-lying areas.

“We had to go in there on New Street with a boat to evacuate some folks,” Storey stated. “Only about four or five chose to get out; the rest said they would stay at home and ride it out.”

Storey emphasized there was not a mandatory evacuation in place, nor did the county open a storm shelter.

“The folks over in Severn who chose to leave their homes were put up overnight at the fellowship hall at Severn Baptist Church,” he said.

There were also isolated incidents of where motorists had to be rescued from the flash flooding that occurred on county roads. Storey said one was on NC 35 at Milwaukee and another was on NC 186 near Garysburg, both Saturday night.

“The rain fell hard and it fell fast, leading to flash flooding on many of our roads,” Storey said.

He added that the rain gauge at his office in Jackson overflowed.

JACKSON – A security upgrade project is pending here at the Northampton County Courthouse, which has the unfortunate label by... read more