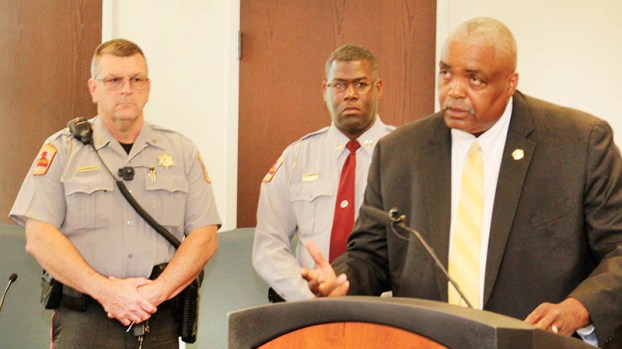 WINTON – Hertford County law enforcement officials did not have to launch a manhunt to serve an arrest warrant on an individual suspected of murdering a Chowan University student in December of 2014.

He was already confined in the Hertford County Jail on an unrelated charge.

On May 20, a warrant for first degree murder was served on 22-year-old Deangelo Devonte Smallwood of Murfreesboro. He now stands formally charged in the Dec. 5, 2015 death of DaMarco Trevon Duncan, 21, of Temple Hills, Maryland.

Smallwood is now confined in jail without the privilege of bond. He made his first court appearance on the murder charge on the day of his arrest.

Duncan was a junior at Chowan University at the time of his death. He was attending an off-campus private party at Sandy Shores Lounge, an establishment located just north of Murfreesboro off US 258, where he was shot and killed. The lounge was rented that night by several Chowan students to celebrate the end of the 2015 fall semester. Apparently, Smallwood was an uninvited guest at that party as Vaughan confirmed he was not a Chowan student.

“This was a sad case, but the end result, with this arrest, is a happy day,” Hertford County Sheriff Juan Vaughan said during a press conference held at the county courthouse.

A statement released on the afternoon of May 20 by a representative at Chowan read, “The University is exceedingly appreciative of the efforts of the Hertford County Sheriff’s Office. Our hearts remain broken for the family of DaMarco Duncan and his loved ones.  We pray that the proceedings will result in peace and justice for this community.”

Sheriff Vaughan said that because the investigation of this murder remains ongoing, to include the possibility of other arrests, no further information about this case can be released at this time.

He did, however, express gratification that the work of his officers and the assistance of the other agencies came to fruition.

“My lead investigator, Dexter Hayes, and other investigators on this case as well as the staff of the other agencies I mentioned earlier worked tirelessly to solve this murder,” Vaughan noted. “They logged a lot of hours on this case. We’re glad this suspect is behind bars.”

The Sheriff said he had contacted the family of DaMarco Duncan to share the news of the arrest.

“They were very, very happy,” Vaughan remarked. “I had stayed in contact with the aunt (the sister of the victim’s mother) pretty much every week or at least every other week during the course of our investigation. She would text me and ask questions and I would let her know how the case was progressing.”

As far as other pending arrests in this murder case, Vaughan confirmed that was possible, although the charges, if any, would not include murder.

Smallwood also had a probable cause hearing on May 20 in a March 25 case where he was charged with attempted first degree murder, felony conspiracy, and shooting into an occupied dwelling.

Smallwood had been in the Hertford County jail, held under a $750,000 bond, since his arrest on March 28 in that case from three days earlier. At that time, Smallwood and three other men were arrested for allegedly shooting a Murfreesboro man and his girlfriend in the head as they in a vehicle and were pulling into the driveway at their residence located at Serenity Mobile Home Park, located on Wise’s Store Road just outside of Murfreesboro. A two-year-old child was also inside that vehicle, but was not injured, although a bullet left a hole in the child’s drinking cup.

Both of the adult victims were treated for their injuries and later released from Vidant Medical Center in Greenville.

Along with Smallwood, the others charged in the March 25 case are 30-year-old Earl Lamont Powell of 106 Standing Lane, Murfreesboro; Shenondoah Perry, age 20, of 186 Pinetops Circle, Murfreesboro; and Antwan Vaughan, age 29, of 151 Vann’s Road, Murfreesboro.