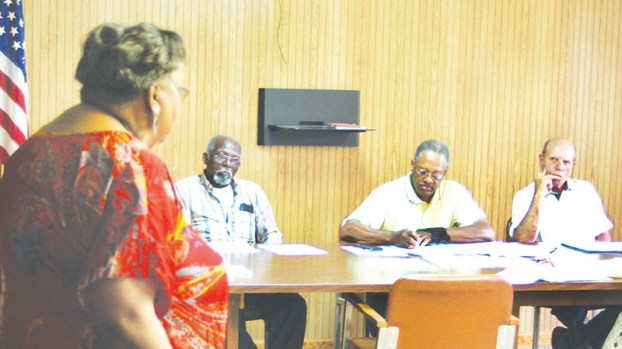 POWELLSVILLE – A group of some 30 Powellsville residents attended the Town Council meeting here July 5 and voiced their concerns over proposed increases in two of the town’s three main utilities services.

At their June 27 meeting the Council approved their 2016-17 fiscal budget, one calling for a nine-cent property tax increase (24 cents to 33 cents) and a reduction of the town’s trash pick-up from weekly to bi-weekly.

As with all proposed budgets, prior to a vote a public hearing is held, but no residents attended to comment at the June 27 meeting.

That was not the case on July 5. Most of the remarks directed at the town board and Mayor Thomas Asbell centered on the rate increases and the garbage collection cutback.

“We’re proud of the town,” said longtime resident Becky Carter. “But after Friday, I’m not so proud; and this group assembled here today tells you we’re not so proud.”

Carter called the bi-weekly garbage collection plan ‘ridiculous’. She went on to voice opposition to the late notice given residents on the changes.

“It didn’t give us much time to get ready, but we did get ready,” she protested.  “I haven’t heard one word about changing the garbage; but it’s one of the nicest things we have in this town. If we were to bring our garbage and put it here in front of Town Hall, it’s not going to be a beautiful town.”

Carter called for the Council to return to weekly garbage collections.

Asbell said he was unsure if trash collections would return to weekly pick-ups, but that he and Council would approach independent contractor Coleman Holley with the request.

The next wave of comments was townspeople concerns with the other rate increases: water and sewer.

“I want to know why my water bill went up $23 a month,” Diane Castelloe asked. “I can understand a dollar increase.  You have people in this town on fixed incomes who cannot afford this big increase.”

“Why are you charging those of us a little further down the street (NC Hwy 42) more than you are the ones in Powellsville,” reasoned Estelle Simons. “It’s all the same system; you should be charging us less.”

“We can understand some of the increase because of the sewage,” said Mattie Watford. “But we never could find out (about) the increase, and we were then slapped with $60.”

“Is there a way we can petition and make this go away,” asked Beth Demery. “What action can we take to go against this?”

Councilman Carlyle Hoggard said despite passing the budget, it could be amended.  He said there was a deadline for Powellsville – as there is with all municipalities – to have their budgets in to Raleigh by the end of the fiscal year (June 30).

“I feel your pain,” Hoggard stated. “That’s what we’re here for. We knew the public was going to be angry with us, but a lot of this fell in our laps. This budget has been sent in, but it can be amended; and amended more than once.”

Councilman James Peele stressed the importance of submitting the town’s budget to the North Carolina League of Municipalities in the state capital.

Peele and Hoggard revealed repairs to Pump #2 at the town’s deep well – an unexpected expense – had cost the town $38,000.

Gerald Waters asked about the Town of Ahoskie’s increase to take Powellsville’s sewage.

“The agreement was we pay them $30,030 a year,” said Asbell. “This put us in great shape; but today we’re now paying them $60,000 – they have doubled what they’re charging us. They were going up before we added the 64 more people to the system.”

Asbell said the interlocal agreement with Ahoskie was originally for 750,000 gallons (sewage) per month covering 15 years of maintenance.

Hoggard did note that the town’s system could also be taken over by Bertie County, but he warned it would be at greater expense. “And then we would have no control over it,” he cautioned.

“I could probably afford (the increase) a month,” said Waters. “But I’m concerned about the elderly, because 99 percent of Powellsville probably can’t.”

Alfreida Jordan reminded the Council to not go back on their word to try and fix the trash problem and to amend the budget.

“I can take trash to the dump (in Rosemead),” Jordan said. “But there are a lot of people who don’t have that convenience, or their health won’t allow them to do it; just be fair to everybody.”

Afterwards, the Council went into their regular session where they proposed adjustments to the town budget and these changes to the water/sewer and trash rates:

Beyond the town limits residents would pay $80/month

From RCNH Archives AHOSKIE – Beating back sweltering heat that felt like 106 degrees, a group of 200 marched 14... read more