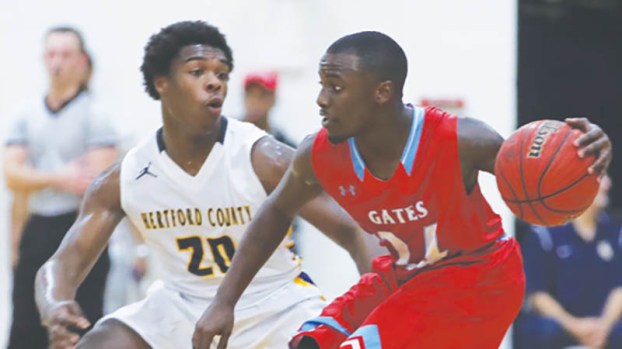 AHOSKIE – There’s nothing “free” about a free throw.

Despite being outplayed and outhustled by an upstart Gates County High School team for the entire contest, the Bears still had a chance to steal a victory from the jaws of defeat here Tuesday night in the semifinal round of the 26th annual Roanoke-Chowan News-Herald Holiday Classic.

With his team trailing by two (70-68), HCHS senior Jaquarii Roberson launched a desperation three-pointer at the final buzzer. The shot missed its mark, but Roberson was fouled, sending him to the charity stripe where two successful tosses would send the game into overtime while making all three would hand the Bears a late Christmas gift byway of an all but improbable win.

Neither of those possibilities unfolded as Roberson sank the first of his trio of freebies, but missed the mark on the next two and the ‘Barons strolled into tonight’s (Thursday) Classic championship game with a 70-69 upset win.

In a game where neither team built more than a six-point lead, the HCHS-Gates County semifinal came down to a multitude of critical possessions by both teams in the fourth quarter.

The Bears opened that final eight minutes of action with an 8-4 run, which started with a trifecta from Roberson and ended with an old-fashioned three-point play from Talik Totten that produced a 56-53 lead for HCHS.

After back-to-back baskets from the Gates County duo of Jawan Riddick and Robert Walker put the ‘Barons up 57-56, the game saw two lead changes and one tie.

With the game on the line, Hertford County’s Delmonta Cherry stepped up for the Bears. He connected on a pair of clutch baskets followed by a hoop from Zion Riddick that tied the game at 68-68 with 12 seconds remaining.

However, Gates County was able to connect on two critical free throws – one each from Dontrell Watford and Walker – inside the game’s final four seconds and then dodged Hertford County’s last-gasp hope to pull off the upset.

With Watford scoring 14 of his game-high 27 points in the first quarter, Gates County led 20-18 after the first period of play.

Sparked by a basket each from Qyshawn Chism and Lance Hunter, the Bears opened the second quarter with four quick points and a 22-20 lead.

A trifecta from Walker highlighted a 6-0 run and a 28-22 lead by the ‘Barons, but HCHS battled back to forge a 30-30 tie thanks to an 8-2 spurt sparked by a trey each form Roberson and Cherry.

This see-saw game swung back to Gates County who closed the first half with a 9-4 run that began and ended with a three-pointer each from Riddick and Walker.

Roberson tallied eight of his team-high 24 points in the third quarter, helping the Bears rally to take a 46-45 lead, but Gates held the upper hand (49-48) by the end of the period.

AHOSKIE – What do members of a motorcycle club and law enforcement officers share in common? When it comes to... read more