AHOSKIE – It was good strategy, for a while.

A deliberate half-court offense with a modified zone defense kept Northeastern in check for the Bertie Falcons for one half of basketball in the Roanoke-Chowan News-Herald Holiday Classic Tournament; but the slumbering giant awoke in the second half and powered the Eagles to an 88-59 win over the Falcons.

Four Eagles scored in double-figures led by Clifford Shaw with 18 in the win which sent Northeastern on to the championship match-up tonight (Thursday) against Gates County, which shocked host Hertford County to earn their championship spot.  Quatravis Riddick’s 22 points for Bertie led all scorers. 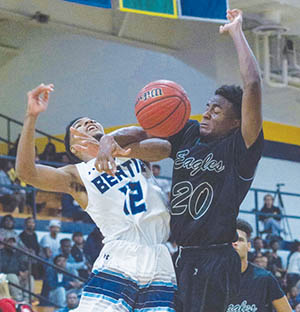 Bertie’s Marcus Philyaw (#12) and Northeastern’s Clifford Shaw (#20) get tangled going for a rebound in the semi-final of the Roanoke-Chowan News-Herald Holiday Classic. Northeastern won 88-59 and will defend their championship tonight (Thursday) against Gates County. | 2nd Chance Productions / Andre Alfred

“As the game wore on we adjusted well to our assignments and we did a pretty good job down towards the end of the game,” said Northeastern coach Ronald Nixon. “Our kids are unselfish and don’t care who scores; they just worry about winning the game.”

Bertie gave the Eagles plenty to worry about when the game began; draining two of their first three three-point field goals, the Falcons might’ve caught Northeastern napping and it helped them establish an early 10-point lead, 13-3. But the Eagles were patient in their comeback, and with Shaw playing on the wing rather than inside he was able to let fly a couple of successful treys of his own – the last of which, with a minute-20 remaining,  got Northeastern their first lead, 16-15.  Bertie tied it on a free throw by Joshua Burden, and a late three-pointer from Riddick to lead it 19-18 after the first quarter.

As the Eagles answered Bertie’s slowdown game by countering with one of their own, they overcame the Falcons’ triangle-and-two defense that protected the middle of the floor.  The second quarter was highlighted by seven lead changes and three ties and one team’s punch leading to the other’s counter-punch.  Bertie coach Derrick Bond began to eat up his time outs, but the breaks kept his players fresh.  Bertie tied the contest at 30-all on a pair of Burden foul shots, but Brian Jones swung the pendulum back in Northeastern’s favor with a free throw of his own.  Twice more the game swung back and forth before Damar Sutton’s baseline lay-up gave Northeastern a 35-34 halftime advantage.

Burden’s early third quarter lay-up gave Bertie a 36-35 lead, but it would be the Falcons’ last.  Spreading the floor, Northeastern was able to open up the game and the Eagles rushed in.  Suddenly, Bertie turnovers turned into fast break lay-ups.  At one point, the Eagles scored on nine-straight possessions.  The Falcons could only score four points the rest of the quarter and were suddenly in a 16-point hole, 60-44, with the final eight minutes still to be played.

Northeastern’s offensive success continued in the fourth quarter – scoring on now 13 of 15 possessions.  Riddick took over for the Falcons, as Northeastern had trouble stopping him.  They also had trouble at the free-throw line, draining only six of twelve.  Sandwiched in between was a three-pointer by Burden, but the Eagles kept up the attack.  Reserve Davion Leigh closed out the game with a pair of three-pointers.  Northeastern twice matched its biggest lead of 29 points, the last one as the final score ticked across the scoreboard.

“Our game plan took away what they primarily wanted to do,” said Bond after the game. “But when you miss those rebounds and give them second chances it can come back to hurt you. Both teams learned some things, and we both know we’ll see each other again (in conference play).”

Bertie (2-8) played Hertford County (2-4) in the Classic consolation game Wednesday night, but that contest was not completed by press-time.