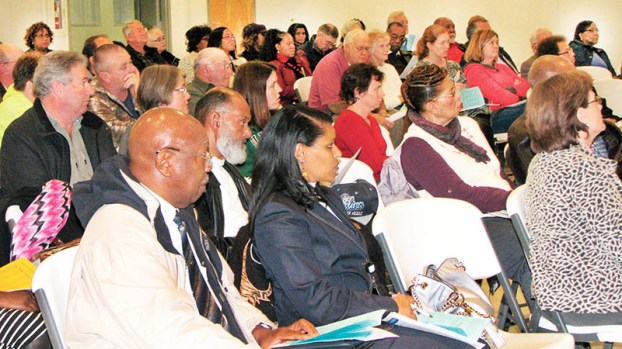 A crowd of about 200 attended a public forum at the Northampton County Cultural & Wellness Center where a proposed $34 million new middle school/high school was discussed. | File Photo by Keith Hoggard

JACKSON – Northampton County’s Board of County Commissioners and Board of Education conducted a public forum here in early January to hear from citizens and answer questions about the proposed $34 million supplemental tax referendum for a new centralized middle/high school.

The meeting was civil, with most audience members concerned about the state of the Northampton County School District, but questioning the need for this supplemental tax.

Fannie Greene, chairwoman of Board of County Commissioners, and Rhonda Taylor, chairwoman of the Board of Education (BOE), opened the meeting with greetings for the roughly 200 citizens in attendance at the Cultural & Wellness Center and each introduced their board members.

Dr. Monica Smith-Woofter, Superintendent of Schools, presented pertinent information about the reasons the school district is seeking a supplemental tax to build the new school.

She said Northampton County has lost 500 families since the 2010 census and the school system has lost 50 students a year to alternative school choices over the past 10 years.

Woofter added that two schools currently is use are each over 60 years old while another school is age 50 years-plus.

Three separate feasibility studies, she said, have called for these three schools, Willis-Hare Elementary, Squire Middle, and Northampton (East) High School, be closed and the students relocated to other schools.

Six options proposed by the BOE, Woofter said, have been discussed with the commissioners about how best to consolidate the student population.

If Willis-Hare students were moved to Conway Middle, Woofter cited as an example, the students of Conway Middle would have to move to a new school, not currently available.

Other problems facing the school district concerning consolidation is the state of the schools. Woofter said Gaston Middle School has the oldest boiler in the district and parts are no longer made to repair it.

She also said as things currently are in this 80-mile wide county, some high school students are boarding buses as early as 5:30 a.m.

If county voters approve the supplemental tax to build the centrally located middle/high school, said Woofter, the county’s average taxpayer with $80,000 worth of property would pay an additional 19 cents per day – “giving up two sodas a month to invest in the future of our students.”

County Manager Kimberly Turner then presented a flyer that had been given to each audience member which provided information about pertinent laws, the question that will be on the March 15 ballot, school debt, financing options, and how the supplemental tax would impact taxpayers.

The supplemental tax, Turner said, would raise taxes 9.92 cents per $100 of valuation in addition to the 92 cents taxpayers now pay.

Audience members were given a sheet of paper for comments and those interested could request to speak.

The first speaker of the evening was Donna Edwards. She was concerned about the cost of the proposed new school, from an estimated $15 million in 2008 to $34 million now.

Woofter also said because the new school has to accommodate both middle and high school students, it costs more to keep the two populations of students separated.

There was some confusion about who would be able to vote on the school tax proposal. Any eligible Northampton County voter has a say, whether they pay any property taxes or not. Landowners who do not live in Northampton County have no vote.

The next speaker was Bill Johnston, a farmer in Occaneeche Neck.

Johnston said he is concerned that Northampton County already the second highest tax rate in the state, and they do    not need to higher.

He questioned whether the schools proposed for closure would be taken care of like Jackson-Eastside, which is a crumbling ruin.

He said better buildings do not improve education, “teachers make all the difference.”

“We do not need more taxes,” Johnston said. “I fly a plane that is 42 years old. Proper maintenance is what is needed rather than building a new building.”

Gwen Bryant, the postmaster in Jackson, asked why the existing buildings can’t be repaired and why mix the middle school students with high school students.

She pointed out she lives in a 150-year-old home. Her husband farms and they have to pay tax on obsolete farm equipment.

She said the county is comprised of mostly senior citizens who are forced to pay all the taxes, even if they have no children of grandchildren going to school.

Next up was Ruth Beck. She pointed out that no information has been made publicly available on this plan. She said high school students from the western part of the county could return to the former Northampton County High School-West, located in Gaston.

Next up was a Mrs. Bolton. She wanted to know the last time students attending Northampton County Schools had met state testing standards.

Woofter said the district has met growth standards, but not proficiency standards.

Woofter also said parents need to work with students to try to get young students up to grade level.

Bolton said she had no luck sending her children to schools in Northampton that met state standards.

“Any building you put up will not make a difference,” she said.

She summed up by saying the county has the second highest tax rate in the state, a failing school system and that if the new tax is levied, “people are going to be getting out.”

Tim Hollowell said the taxpayers can’t afford more taxes and that a new school is not the answer.

After that, the audience started asking the same kinds of questions about the poorly performing schools, and the high tax rates. The vast majority attending the meeting concluded a single $34 million new school would not solve any problems.

MURFREESBORO – One mother’s quest has turned her grief into helping others, a few months after her teenaged daughter committed... read more