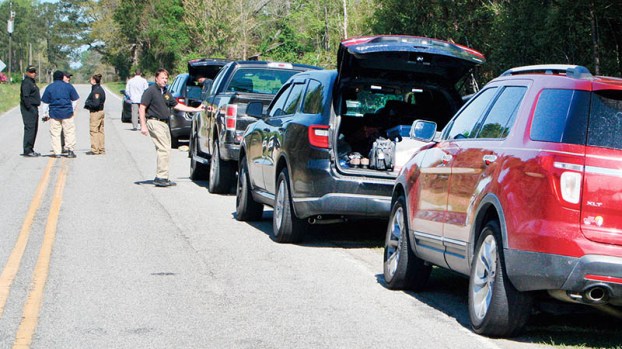 Bertie County Sheriff’s deputies line up along Ashland Church Road, off NC 45 near Midway, where the headless corpse of a black male was discovered in early April. | File Photo by GENE MOTLEY

MIDWAY – The Bertie County Sheriff’s Office along with members of the State Bureau of Investigation (SBI) are investigating a suspicious death after a body was discovered in a wooded area just off a rural road in eastern Bertie County.

Sheriff John Holley said the death is being treated as a homicide.

In early April, the Sheriff’s Office was notified that a civilian had discovered an unclothed, decapitated body positively identified as that of a black male at a site on Ashland Church Road, located off NC 45 near Midway.

Holley said efforts are underway now to positively learn the identity of the victim.

A few days after the gruesome discovery, law enforcement authorities identified the decapitated body as that of Kelvin Singleton, 26, a jail escapee from Edenton.

Singleton broke out of the Chowan County Jail on Easter Sunday afternoon. He was reportedly spotted about ten minutes later a few blocks away in the Edenton town limits, but was reportedly never seen again.

A member of a hunting club discovered what turned out to be Singleton’s nude, partially decomposed and headless body near Midway in a wooded area just off Ashland Church Road and reported it to law enforcement.  The Bertie County Sheriff’s Office and the State Bureau of Investigation then began a joint investigation into what was believed to be a homicide.

Sheriff Holley said he believed the body had been at the location where it was found for about a week. Holley said Singleton’s head has still not been located.

“It’s very sad,” Holley said. “No matter what kind of life he led, this young man had family who loved him.”

Chowan County Sheriff Dwayne Goodwin called Singleton’s death one the most bizarre he has seen in his 25 years in law enforcement.

“The loss of life is sad no matter who it is,” Goodwin told a Virginia TV station on Tuesday afternoon. “He was somebody’s child.”

The sheriff says they were able to identify the body through DNA, although Singleton had many tattoos that matched up with N.C. Department of Corrections records.

Goodwin says there’s no evidence to show Singleton was killed where his body was found.

At first Goodwin speculated that Singleton may have taken flight to the Charlotte area where his mother and a child he is the father of now live.

However, no one reported seeing Singleton in the Queen City area, or anywhere else for that matter, following his escape.

Singleton had faced charges not only in Chowan County, but also in Charlotte/Mecklenburg County, including robbery, kidnapping, and assault with a deadly weapon.

Singleton was arrested in Chowan County in January for the armed robbery of an Edenton tobacco store.  He escaped March 27 where investigators say he constructed a homemade shank (knife) out of a toothbrush and then used it to force a jail detention officer to release him.

There have been no arrests in Singleton’s death.

“We will continue looking into this homicide,” said Holley. “We’ll go forth with this just like we’ve done in the past; we will continue to work hard.”

Bertie County investigators are still asking anyone with information to call the Sheriff’s Office at (252) 794-5330.

AHOSKIE – There’s nothing “free” about a free throw. For proof, ask Hertford County High School. Despite being outplayed and... read more