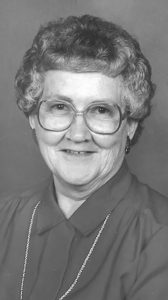 Mrs. Brantley was born on October 22, 1928 in the Trap community near Colerain and was the daughter of the late Arthur Ferguson and Ella Vinson Ferguson. In addition to her parents, she was also predeceased by her husband of fifty-three years, Robert H. Brantley, and grandson, Lt. Nicholas Brantley.

Except for a brief time as a teacher’s aide, she spent her adult life as a homemaker, wife and mother. A faithful member of Center Grove Baptist Church, she served as children’s Sunday school teacher for over two decades, was an active member of the Women’s Missionary Union, and choir member.

Her family will remember her as a good southern cook who always made gatherings and holidays special. She took great pride in maintaining a clean home and neat yard.

A graveside service will be held Friday, December 30, 2016 at 11:00 a.m. at Highland Memorial Gardens in Ahoskie, NC with Rev. Daniel Mullens and Rev. Bob Skeens officiating.

The family expresses deep appreciation to the staff of Three Rivers Health and Rehabilitation for their kindness and care over the past four years.

Online condolences may be sent to the family by visiting www.haroldmasseyfuneralhome.com