Born on October 27, 1924, in the Center Grove Community near Ahoskie, David was a son of the late David Ralph, Sr. and Alleen Brantley Brinkley. He was also preceded in death by his wife of 66 years, Margaret C. Brinkley, and a sister, Nellie Mae B. Dilday. 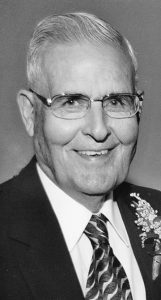 On March 20, 1947, David married Margaret Leigh Chitty of Murfreesboro. He was a retired farmer and seed distributor and also a loving, devoted family man and friend.

As a faithful, very active member of Center Grove Baptist Church, David served as a deacon over 55 years, as church secretary/treasurer for 48 years, and was made an honorary lifetime deacon. He served on the Board of the West Chowan Baptist Association for many years. Also as a Lion Club member, he was awarded a lifetime membership and made a Jack Stickley Fellow for dedicated humanitarian services.

A celebration of life service will be held on Tuesday, December 27, 2016 at Garrett-Sykes Funeral Service in Ahoskie at 11:00 a.m. with Rev. Daniel Mullens officiating. Burial will follow at Highland Memorial Gardens of Ahoskie.

The family will receive friends at the family home.

In lieu of flowers, memorial contributions may be made directly to the Baptist Children’s Home of NC, PO Box 338, Thomasville, NC 27360, or online by visiting www.tmcfunding.com/search, then type David Brinkley or to the charity of your choice.

Garrett-Sykes Funeral Service of Ahoskie will be handling the arrangements for the Brinkley family and online condolences may be directed to the family by visiting www.garrettsykesfs.com