Barbara was born in Rosemead, NC in Bertie County on October 4, 1932 to the late Wayland Riddick Jones and Elsie White Jones. Barbara graduated from Mars Hill High School and then attended Chowan College. She worked at Ridgecroft School as the business manager for twenty years. 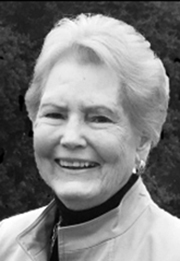 Barbara married George B. “Buck” Parker on June 20, 1953 at Mars Hill Baptist Church. They were happily married for 63 years and enjoyed raising two daughters. Buck and Barbara lived in Ahoskie, NC, for 37 years, retired to Blowing Rock, NC, for 16 years and spent the past 10 years in Advance, NC.

Barbara was a member of Center Grove Baptist Church in Clemmons, NC. She enjoyed traveling with her husband, playing Rummikub with friends, gardening, sewing and reading.

A graveside service was held on Monday, December 26, 2106, at Highland Memorial Gardens in Ahoskie, NC. A Celebration of Life service at Center Grove Baptist Church will be held at a later date.

Online condolences may be made at www.hayworth-miller.com.