MURFREESBORO – There’s no feeling greater than to see a child’s eyes light up at Christmas as they eagerly unwrap a gift.

But does that same child experience the identical feeling after handing over a gift – one they worked to pay for and then carefully select and wrap – to an adult?

One Northampton County mother wanted to instill the long-held value of it’s better to give than receive on both her young daughters. 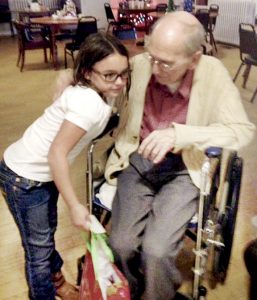 Mackenzie (above) and Laura (below) Bryant are shown visiting with residents at Pine Forest Rest Home in Potecasi where the two sisters delivered personalized Christmas gifts on Dec. 19. Contributed Photos

Jennafer Bryant, an RN at Aulander Medical Practice and Nucor Steel, came up with an idea about a month ago to share the gift of generosity with her daughters, 8-year-old Mackenzie and 5-year-old Laura. Both are students at Northeast Academy, respectively in the first grade and kindergarten.

“Actually, the message I wanted to share was more with Mackenzie because she’s at the age where she needs to learn about how giving makes a person feel happy and leads them to want to do more to help people,” Bryant said. “Laura just tagged along, but somehow I felt my message got to her as well.”

The mom added that Mackenzie already had a head start on being generous in nature.

“She has a kind heart; she’s always been that way and it makes me proud she’s like that,” Jennafer stated.

The plan for passing along the message was to hold a fundraiser and use the proceeds to purchase gifts for residents at Pine Forest Rest Home in Potecasi.

“Mackenzie wanted to have bake sale,” Bryant said. “We then used the Internet to research recipes and after deciding on which ones we wanted to use it was off to the grocery store to purchase the items.”

Over a span of Tuesday through Friday (Dec. 13-16), mother and daughters spent nights in the kitchen whipping up all kinds of goodies. They were batches of peanut butter cookies, turtles (pretzels covered in chocolate topped with pecans), white chocolate candy canes, chocolate chip cookies, Lady Bugs (pretzels with M&M’s and Hershey Kisses) and sugar cookies (including a separate batch attached to sticks). 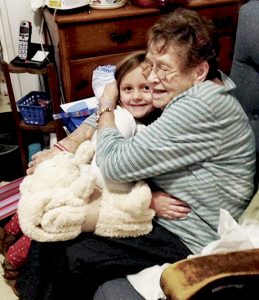 On Saturday, Dec. 17, the family packed up the goodies and headed to Conway where the bake sale was conducted at the Mini Pearl Boutique. That business is owned and operated by Rebecca Martin, aunt to Mackenzie and Laura.

“We started at 10 a.m. and were completely sold out by 1 p.m.,” Bryant said. “We raised enough money to purchase gifts for all the residents at Pine Forest.”

And what made those gifts special is they were individualized for each resident.

“Sherri Mayle (the Activity Coordinator at Pine Forest) gave me a list of the residents and their special interests,” Bryant noted.

“That was a wonderful experience for both Mackenzie and myself. It was also a fun mother and daughter day,” smiled the mom.

One night later (Monday, Dec. 19), mother and daughters arrived at the rest home and personally stopped by the room of each resident (23 in all), putting smiles on the faces of the giver and receiver as the gifts were distributed.

“The smiles on the residents faces were priceless and they were so thankful for everything,” Bryant said. “Watching the kindness and love my girls showed them was better than any present I could ever receive.

“I hope they both will always know how nice and important it is to show compassion and kindness to others. It truly was a rewarding experience,” she concluded.

That experience also touched the hearts of the two sisters.

“It was special to me because it’s the right thing to do,” said Mackenzie. “I liked giving the presents, especially to the lady that we gave jewelry.”

“My favorite part was giving the gifts and helping them open it,” remarked Laura.

Mom’s favorite part was it was a lesson well received.

Back by popular demand

TRAP – Where’s Spike? That’s the question on the lips of many of his loyal fans. For the answer, it... read more