MURFREESBORO – One mother’s quest has turned her grief into helping others, a few months after her teenaged daughter committed suicide after being bullied by classmates and others.

Jessica Futrell was a month shy of her 15th birthday when she died in September. Since then, her mother Lizbeth Futrell, says she has seen an outpouring of love and caring from just across the street to all the way across the country.

After Jessica’s death, Lizbeth initially made the hard decision for her family this year to not celebrate the holidays. All that changed, however, when someone bought a 7-foot, pre-lit tree for the home. 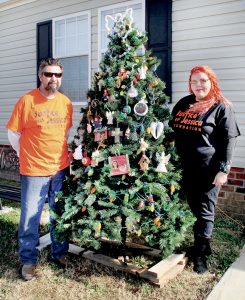 Lizbeth and Robert Futrell stand adjacent to a Christmas tree outside their Northampton County home, one covered in special ornaments, to include angel figurines, in memory of their daughter who died by her own hand earlier this year. Staff Photo by Cal Bryant

“I put it outside and I really didn’t want it at first, until I posted it on Facebook and people started donating ornaments to decorate it in Jessica’s memory,” Lizbeth recalled.

She continued, “Within days of the tree being up outside in front of the house, ornaments were coming in from all over. Neighbors, friends, people in the community, and total strangers from everywhere from Alaska to Florida to New York sent them here. It just kind of snowballed into a really amazing thing… It’s a beautiful sentiment of community love and support.”

Some days, Lizbeth says she receives eight or ten ornaments at a time, either in the mail or in person. The idea behind the tree in Jessica’s memory is for others to decorate it and build her up, as opposed to how bullying can break a person down.

Lizbeth and her husband, Jessica’s father Robert, created the Justice for Jessica Foundation to raise awareness of how bullying, brainwashing and manipulation can play a part in teens and others having depressive thoughts, cutting themselves, and contemplating or committing suicide. They also plan on pointing out to their target audience how tragically those who are left behind are affected when a loved one dies, especially from suicide.

“It’s senseless and completely preventable. I plan on talking to schools and churches starting in January,” Lizbeth noted.

“Upon some investigation of my daughter’s electronics, I found that she was being brainwashed and manipulated into dark thoughts as well as (suicide); in my opinion she was being bullied,” the mother added.

The organization held its first event on Oct. 15 to coincide with what would have been Jessica’s 15th birthday.

“It was a great success and we even had hot dogs, cake, and a balloon release in her honor,” her mother stated.

Lizbeth plans on keeping the tree up year-round and holding fundraisers where others can purchase ornaments on special occasions such as hearts for Valentine’s Day, eggs for Easter, and so on.

She is also seeking volunteers to help with the cause. Jessica was a freshman at Squire Center Early College in Gaston, where she was the Vice President of her class and wanted to transfer to The North Carolina School of Science and Math next year.

“I am seeking volunteers and donations to this nonprofit cause,” Lizbeth noted. “These issues do not just affect teens, they affect college students, youth groups, and church members.”

When word of Jessica’s death broke in the community, social media helped spread it far and wide. A family friend, Kristy Blanton in Raleigh, started a GoFundMe donation page for the cause, which raised nearly $4,000.

Blanton stated on the page, “It appalls me to think that a parent can be so disconnected NOT to know how their children interact with others. I believe that it all starts at home. When we teach our children that it’s okay to treat others bad… we are doing them and others an injustice. Robbie and Liz should not be grieving the loss of their daughter today. It infuriates me that kids think it’s okay to bully others. Absolutely unacceptable.”

The Justice for Jessica Foundation will work to spread that message near and far, Lizbeth said. A certified life coach, she plans to hold information sessions for parents who wish to learn positive ways of dealing with their kids who are in depression, and information for treatment centers for the teen and the family.

“During the school and church sessions the kids will receive information packets and glow in the dark bracelets to remind them that Jessica is the light in their darkness. Through her story and my work I hope to save those who are depressed and hurting. The foundation hopes to be the light in their darkness and I hope the foundation becomes a hope for the hopeless,” Lizbeth stated.

The Foundation’s next event is scheduled around Valentine’s Day. More information can be found on the organization’s page on Facebook, “JUSTICE FOR JESSICA FOUNDATION”.

Lizbeth also started a Grieving Support Group as part of the foundation, and plans on starting to hold meetings again in January as soon as she finds a place to conduct them.

They also plan on starting a group for young adults, where teenagers can come and find friends as well as support to help with issues for their age group.

Lizbeth expressed her appreciation for everyone who had pitched in support for her family following her daughter’s death, as well as those who helped the foundation’s cause.

“Every child we touch is a living memorial to my daughter. God bless the community for all of its help,” she said.

MURFREESBORO – One mother’s quest has turned her grief into helping others, a few months after her teenaged daughter committed... read more