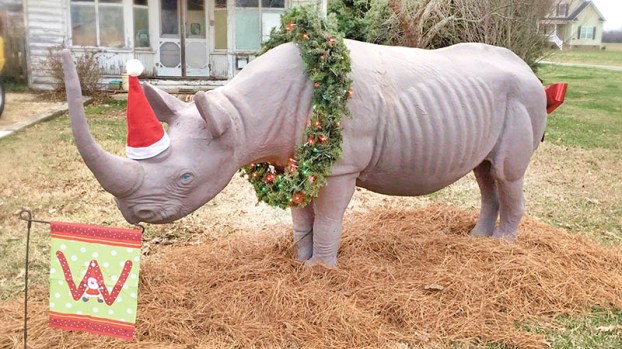 “Spike” the Rhino has come out of retirement and is dressed for the holiday season at 1305 Meadow Road near Trap. | Contributed Photo

Back by popular demand

That’s the question on the lips of many of his loyal fans.

For the answer, it seems that Spike has enjoyed a brief break from fame, but has decided to exit retirement….much to the delight of those accustomed to seeing this popular local character in the weeks leading up to Christmas. His annual “costume” for the holiday is also eagerly anticipated.

For those unaware of Spike, his legend grew over the several decades he spent overlooking the main drag in downtown Colerain.

Spike is a rhinoceros created from fiberglass. His home was once over the entrance to the now closed Western Taxidermy Studio in Colerain. However, after years of weathering hurricanes, changing seasons, and general wear, there was some question as to whether Spike was a safety concern for those walking or driving through downtown Colerain.

When Jim Edwards, owner of Western Taxidermy, noticed that Spike might be ready to retire from his duties, the rhino was extracted from the platform on which he rested. He was moved to the back of the taxidermist shop that specializes in African and Reproduction Taxidermy. It was from there that Peter Woglom, a local Physician’s Assistant, expressed an interest in saving the unofficial mascot of Colerain.

Woglom said he remembered Spike atop the storefront when he and his family moved to the area in 1993. Once the rhino’s duties as chaperone of Colerain had ceased, Woglom offered to purchase Spike from Edwards. A deal was struck and Spike moved to the Woglom home in Trap.

When the family lived on NC 42, Spike could often be seen in the front yard. During his Christmastime appearances, Spike was appropriately dressed for the season. One year he was dressed as Santa, complete with a wooden cart in tow that contained a Christmas tree.

After his most recent departure from the limelight, Spike is back.

“Spike has come out of retirement after several years of overlooking the pond and flower beds in our backyard,” said Woglom. “He dusted off his old retired Christmas duds for one last show this year.

“Actually many folks have asked where he is and if he was going to show his face this year. Well due to popular demand he decided to make another appearance,” Woglom added.

Spike’s new home is at 1305 Meadow Road near Trap. It’s certain that he’s actually a “ham” – a show-off who would love nothing better than for the public to drive by and enjoy his new outfit for Christmas.

COLERAIN – The Bertie County Sheriff’s Office is seeking the public’s help with information regarding an armed robbery of a... read more