AHOSKIE – Hertford County overcame a sluggish start and went on to win with authority, 72-43, over Currituck County in a Northeastern Coastal Conference match-up here Friday night.

“We started out slow, but gained momentum in the second half,” said Hertford County coach Charles Simmons. “We did a good job in transition, played good defense, and we rebounded well.” 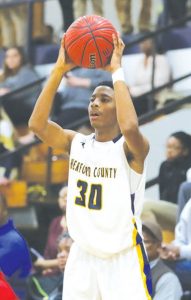 Neither team could establish its offense in the first quarter and both had trouble getting stops.  Hertford County led it 6-2 in the opening minutes, but the Knights chipped away and tied it at 8-8, late.  Currituck took their last lead on a Nick McDonald baseline jump shot, 10-9, before Hertford County tied it at 12-12. The Bears carried a three-point lead into the second quarter when Talik Totten nailed a long three-pointer at the horn for a 14-12 Bear lead.

Hertford County started to stretch it out in the second stanza as foul trouble slowed the pace for both clubs.  Demonta Cherry’s three-point play gave the Bears a 23-16 lead.  Then after a Knights basket, Hertford County reeled off three straight three-pointers and sprinted to the locker-room ahead 32-17 at the mid-break.

After another triple and a lay-up got the Bear lead up to 20 points at 37-17, Currituck made a short run to get their deficit down to 37-23.  But Hertford County stretched it back out and the lead became 21 points, 44-23.  An exchange of buckets kept the lead in the 20’s as Lance Hunter nailed a three-pointer to make it 52-29, Bears, headed to the fourth.

Midway through the final frame Hertford County built its largest lead at 64-35 on a Zion Riddick steal and lay-up.  From there, Simmons cleared his bench and the Bears had secured their second win of the year.

“It was a good win to open conference play,” said Simmons.