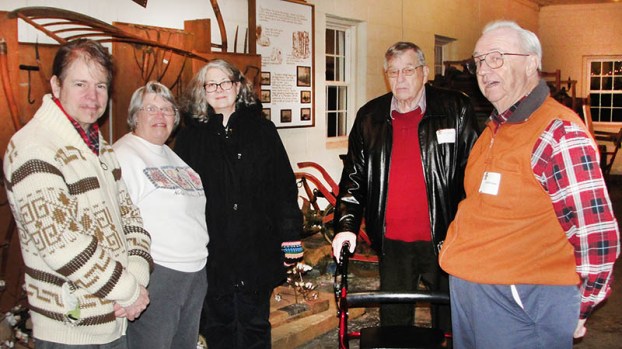 Winfred Askew (right) and S.T. Wrenn (second from right) pose with a trio of patrons stopping by the Agriculture Museum, one of 14 stops on last weekend’s annual Candlelight Christmas Tour in historic Murfreesboro. | Contributed Photos by Danny Bowman Jr.

Old man winter made a special appearance to lower the temperature rapidly as the sun set and the old north wind added its wind chill effect on Friday. This served to entice people to move quickly to each of the 14 sites selected to see. 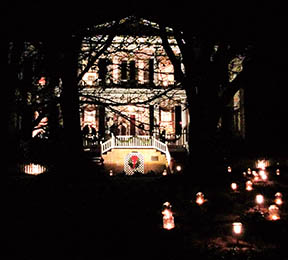 Candles light the way to the historic Camp-Hill-Gary House, which was one of three new stops on this year’s tour.

Catherine Jenkins stated this year the theme was period decorations, to include fresh and natural greenery.

Visitors were shown a closet. Closets were considered a rarity because they were taxed as a room and affordable only by the wealthy. Waxed bouquets instead of fresh flowers were used because it was impossible to maintain fresh appearance.

The detached kitchen was the next stop. This detachment was necessary because kitchen fires were frequent and also for keeping the main house cool during warmer weather. Canning, smoking, salting and pickling were used to preserve food. A wooden dough kneading machine and automatic pea sheller were exhibited.

After tour patrons checked in they could run the gambit as they chose. As darkness enveloped Murfreesboro thousands of candles illuminated walkways to aide visitors as they walked throughout the historic district.

Walter Reed House, Pipkin-Harrell-Chitty House and the Dr. Gary House were new homes to visit.  The Walter Reed House was built in the mid-nineteenth century. It was occupied by Rev. Reed, a Methodist minister, twice, when Walter Reed, his son, was a small boy and again when Walter was a medical student.  Walter met and married the girl across the street, Emilie Lawrence.  Emilie mirrored her parents by burying her doll baby when they buried their silver to hide it from the advancing army. The doll was unearthed, restored and resides here today. An adult cradle was also on exhibit.  It was used to protect the patient from the elements, keep him safe and aide in his recovery.  Dr. Reed experimented and confirmed a Cuban doctor’s observations of the relationship of the mosquito and yellow fever in 1901.

The Camp-Hill-Gary House is currently a private residence owned by Suzanne and Douglas Deets, who graciously welcomed visitors. The oldest portion to the house dates to the eighteenth century.

The Pipkin-Harrell-Chitty House was built around 1825 and remodeled in the 1850s.  An 18th century smokehouse, a European marble mantelpiece and the porch’s latticework are noteworthy. 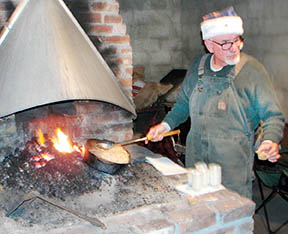 The John Wheeler House was built in 1810 and housed the Murfree and Gordon Store. John Wheeler purchased the store in 1814 and made it into his residence until 1867. The separate dining room is the only remaining brick dependency in Murfreesboro.

The kitchen was toasty warm. Deer venison stew, homemade cookies and other tasty items were being prepared at the hearth.

At the Wheeler House the St. Thomas Episcopal Church choir of Ahoskie sang in perfect harmony. In several pieces they were accompanied by a musician. This was an unexpected bonus enjoyed between the Wheeler house and kitchen.

Hertford Academy was the place people could satisfy their sweet tooth. Made from scratch cakes included chocolate and coconut just to mention two of the 20 or so cakes.

Chowan University’s President Dr. Chris White played piano in the parlor, accompanied by Frank Harris on clarinet.  The clarinet would have charmed any king cobra to rise to the occasion. Dr. Chris White’s tickling of the ivory carried people back to a time when families relaxed and enjoyed each other after a long day.

The William Rea Museum houses the Gatling Gun, woodwork from the Gatling Plantation from nearby Maney’s Neck. Meherrin River Indian artifacts as well as agricultural and carpentry implements were also on display. There are also historical displays of early education, river trade and religion.  Volunteers dressed in period dress as well as three Confederate soldiers were on site to walk visitors through the museum.

This commercial brick structure built in the beginning years of the 19th century is probably the first of its kind.  William Rea is thought to have built it.  Ferguson agriculture Implement Company, famous for its early peanut picker, occupied these premises in later years.

The D.C. Barnes Law Office, now Village Print Shop, was on the tour. There, visitors browsed the among the display of early printing presses. A section within the building is devoted to the work of F. Roy Johnson, a longtime newspaper and book publisher in Murfreesboro.

Two Chowan University professors and one student greeted guests at the Print Shop.

Evans Tin Shop was originally Northampton County’s Town of Princeton’s Post Office.  Princeton, a river port, located two miles upriver, gradually disappeared as Murfreesboro prospered. This structure was moved to its present location.  John Evans was one of most outstanding tinsmiths in this area of North Carolina.  This structure contains the tools the family plied to his trade. Another volunteer showed handmade products of the tinsmith trade.

Volunteers welcomed visitors to the country store and told them about it and the wares of yesteryear. The B.B. Winborne Law Office and Country Store was built in 1872 by William P. Beaman. It was purchased by Uriah Vaughan, Sr. in 1879 and willed to his daughter.  Her husband, Judge Winborne, used it as his law office.  In 1976 it was moved to its present location and restored.  Today the first floor depicts a period general store.  The Parker Country Store collection is displayed.  The upstairs is furnished with the judge’s furniture and law books.

The Vincent-Deale Blacksmith Shop houses an outstanding tool collection belonging to W.H. Deale of Southampton County, VA, a blacksmith during the Civil War. It was donated by his great-grandson, Hugh Vincent, Jr.  A working forge is on site and a blacksmith demonstrates the craft during special tours.

Visitors were greeted by an outdoor fire at the Blacksmith Shop. Entering they were greeted by the sounds of The Potecasi Creek String Band. On hand were volunteers who prepared salted, roasted peanuts to be sampled and sold.  The peanuts were donated by Hampton Farms and sales proceeds went to the Historical Society. Seafood bisque, prepared by John’s Seafood and Steaks, was offered as a tasty sample.

Next stop was the Agriculture/Transportation Building which was converted from an old warehouse.  It contains an early carriage similar to one rode in by Lafayette during his visit to Murfreesboro in 1825. A replica of the airplane designed, built and flown by James Henry Gatling in 1873 is displayed here.

Also on display are two antique peanut pickers, and a cotton gin owned by the Vann Family.  A canoe, plows, seed planters and other implements are displayed.

Volunteers greeted visitors and told about items in the museum and answered questions.  The Sojourners of Newsoms, VA caroled Christmas songs.

Chowan University was also on the tour, which was a tram ride around the beautifully decorated campus.

Horse drawn carriage rides were provided in the historic section.

The Murfreesboro Historical Society wishes to thank the visitors traveling from the Outer Banks Virginia Beach, Chesapeake, Gloucester and other origins who came and supported the tour.

Over 125 volunteers worked tirelessly for days to prepare for this event. Thousands of candles had to be manually lit each night, cakes baked, meals cooked and sites manned in preparation for the guests.

Smiles were seen, laughter heard, spirits were lifted and hearts warmed over the two-day event. There was something here to tickle everyone’s fancy and it ended with everyone wanting more and looking forward to next year’s event.

COFIELD – A railroad renovation project worth in excess of $11 million is being praised for not only for helping... read more