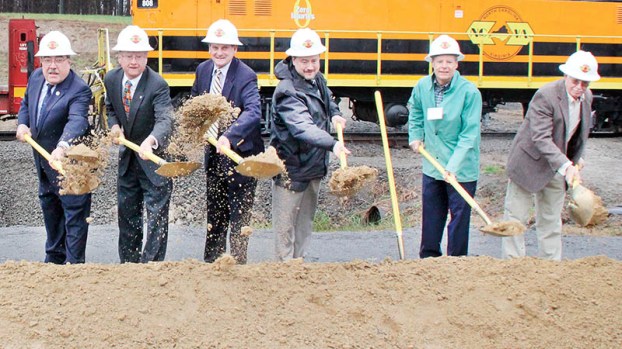 COFIELD – A railroad renovation project worth in excess of $11 million is being praised for not only for helping Hertford County’s largest industry become more competitive in the marketplace, but for improving the local economy as a whole.

On Monday, the N.C. Department of Transportation joined with officials from Nucor Steel – Hertford County and North Carolina – Virginia Railroad (NCVA) to formally break ground on a rail improvement project that uses public and private funds.

The $11.6 million project is scheduled to be completed by the end of 2019. NCDOT secured half of the funding through a federal grant from the Transportation Investment Generating Economic Recovery program. The balance of the cost is covered by an investment of $3 million from NCVA and $2.8 million of state funds.

Currently, NCVA operates its trains over the 52-mile line (which snakes across Hertford, Bertie and Northampton counties, from the Nucor plant to the main CSX rail line in Boykins, VA) at a speed of 10-miles-per-hour or less. The rail line is now capable of having cars loaded to a maximum gross weight of 270,000 pounds. This project will allow NCVA to ship rail cars loaded to 286,000 pounds gross weight, and at speeds higher than 10 mph. 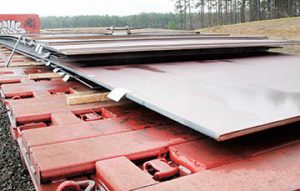 State officials noted that increasing freight rail capacity will help reduce the amount of goods that need to be shipped by truck on U.S. 158 and other area roadways.

Andy Chunko, President of NCVA and Senior Vice President of the parent company, Genesee & Wyoming Railroad, thanked all those involved in the project.

“What he has done for this area and for our railroad is protect a lot of jobs in this part of the state, as well as allow existing businesses to grow,” noted Chunko. “This project also provides further opportunities for industrial development along our rail line, which turns into more jobs. The project also makes our existing customers more competitive as it strengthens our infrastructure, allowing them to ship and receive additional freight.”

Chunko referenced Nucor Steel of Hertford County as not only NCVA’s biggest and most important customer, but a “major industrial force” in the entire region of the state.

“For us to continue to invest our capital and make sure this railroad is at the point where we can continue to serve our customers, this is what this project does,” he said.

He said the project includes 17 miles of new rail, 10,000 new rail ties, and upgrade of 12 rail bridges in order to handle the increased weight capacity on the rail cars.

“Now we’re capable of shipping, by each rail car, the equivalent of what three trucks can carry,” Chunko said. “This weight capacity increase means we can ship about three and one-half, perhaps as much as four truck loads per rail car. That allows Nucor to become more competitive.

“This is not just a general maintenance project, this is a line upgrade to handle more capacity. Once this is complete it will also allow us to operate our trains at speeds greater than 10-miles-per-hour. That helps us drive growth, not only at Nucor, but all long our line,” Chunko added.

For his role in ensuring the project received federal transportation funds, Rep. Butterfield was steadfast on his desire to bring economic development to his congressional district.

“Over my 12 years in Congress I’ve learned that the government cannot alone guarantee economic development and private industry cannot do it alone, so these public-private partnerships are the wave of the future,” Butterfield stated. “I thank all the stakeholders who have come together for this project. I thank NC DOT and those in Washington who provided the capital. I look forward to great returns from this investment.”

Chunko also recognized the local efforts (county and municipal) in the project.

“One thing we take pride in at Genesee & Wyoming, because we operate short-line railroads, is our partnerships with the local communities where we operate,” Chunko remarked. “Our employees live in these communities and we want to be good neighbors.”

“This project is a great example of what North Carolina is doing to increase freight capacity, improve efficiency, and enhance safety on railroads in the state,” said Tennyson. “It is also a major step toward fulfilling Governor Pat McCrory’s goal of leveraging our infrastructure to create economic development opportunities.”

Tennyson shared that it was McCrory’s goal to devise an objective system to judge the value of projects and then make public investments on those projects that give the highest return.

“This project is clearly the result of the congressman’s (Butterfield) efforts and a special grant, but it’s an example of the kind of thing that needs to be done,” Tennyson stressed. “We need to make sure that we’re using the limited amount of dollars we have in places where we need them. This is an investment in our future.

“More than 60 percent of the Nucor plant’s annual production ships by rail, which means the upgrading of this line is critical to their operations and their continued ability to compete in today’s global market and support the economy of this area,” continued Tennyson. “Thanks to this project, NCVA will be able to ship heavier loaded rail cars at faster speeds, which is key to serving industries based here and opening the door to new economic opportunities for this region.”

Michael Miller, Chief Marketing Officer for Genesee and Wyoming, said the project was of particular interest to him because he’s a North Carolina native.

“We have 121 railroads across the world, and this is only one of three in North Carolina and is our largest and most important one we have in North Carolina,” Miller stated. “Thank you to Congressman Butterfield and Secretary Tennyson for all you have done to get this project off the ground. And thanks to Nucor; if you were not here today there would be no grant; there might not be a NCVA railroad.”

Miller added that when Genesee and Wyoming took ownership of NCVA Railroad four years ago, there was a lot of work to be done to bring it up to where it needed to be.

“We’ve spent a lot of money to get this railroad back in shape,” he noted. “Quite honestly, as much money as we put in we wouldn’t be able to get it to this level without the help of the state and federal government.”

He said that the slight increase on the weight capacity may not sound like much (a nine percent improvement), but even that small amount makes a big difference.

“Nucor is competing with steel mills all over the world, and anything we can do to make them more competitive by providing a more efficient supply chain allows them to sell more steel, allows them to create more jobs, and allows us to attract new businesses into this area,” Miller concluded.

Bob McCraken, General Manager and Vice President of Nucor Steel – Hertford County, was also appreciative of the efforts to help his company.

“This project means a lot to us here at Nucor; it’s something we’ve been hoping for for a long time,” McCraken said. “It’s true, this project does make us more competitive, nationally and globally.

“We do like that this project will also significantly increase the mobility of freight in and out of our region, which we hope brings more jobs to northeastern North Carolina and more customers for the rail line,” he added.