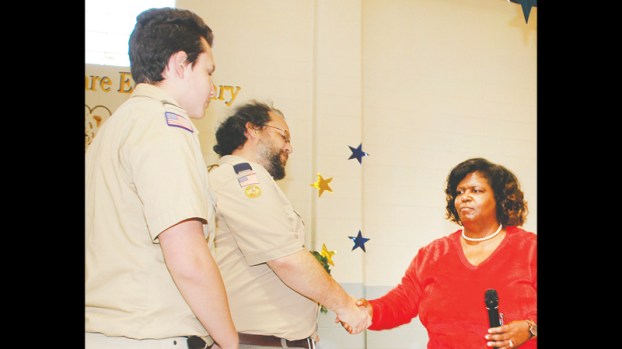 PENDLETON – It was a day to smile rather than mourn.

It was a day to remember the good times enjoyed among classmates, rather than the tragic events that unfolded in the early morning hours of Thursday, Dec. 1.

It was a day to celebrate the life of Chase Vann.

On Friday, students here at Willis Hare Elementary School – the majority dressed in pajama pants; ditto for several members of the staff – enjoyed a break from their studies, watching the holiday-themed movie “Polar Express” in the gym. 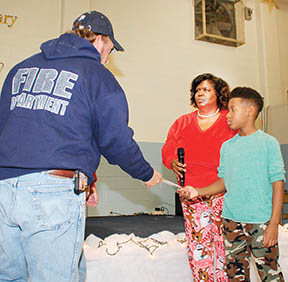 The day-long event served as a benefit for those brave emergency responders who rushed to the Vann home located on US 258 in the Pinetops community of Northampton County. Despite the efforts of three fire departments – Woodland, Conway and Murfreesboro – the lives of Chase, his mother, Sarah, and two-year-old sister, Shapira, could not be saved as the blaze consumed their home.

“It still saddens our hearts over the loss of Chase and his family,” said Kimberly Scott, Principal of Willis Hare Elementary. “While Chase was a 4th grade student here, we came to love his family as well. His mother was seen in our school practically every day. This was a big loss for our Willis Hare family.”

Scott praised the students and staff for participating in a pair of in-school fundraisers held last week. On Monday (Dec. 5) students/staff could choose to donate $1 each for the opportunity to wear boots to school.

“Chase loved to wear his boots; we thought that was an appropriate way to generate funds that we used to make donations to the three fire departments on the scene at Chase’s home, and to raise funds to make a donation to Chase’s Cub Scout Pack (#129 of Ahoskie),” Scott said.

For a $2 donation per person, students could wear their pajama pants to school on Friday and enjoy movies in the gym. 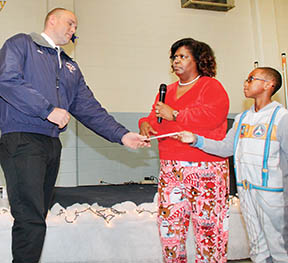 The life of Chase Vann and his family also touched the heart of his fourth grade teacher, Geanne Chlomoudis. She read a poem (author unknown) entitled “A Letter From Heaven.”

“If tomorrow starts without you, and I’m not here to see; if the sun should rise and find your eyes filled with tears from me.

“I wish so much you wouldn’t cry the way you did today; while thinking of the many things we didn’t get to do.

“I know how much you loved me, as much as I love you; and each time you think of me, I know you miss me too.

“When tomorrow starts without me, don’t think we’re far apart; for every time you think of me I’m right here in your heart.”

Scott then summoned representatives of each of the four organizations present to receive $200 checks for the roles they played in Chase’s life and in his memory. 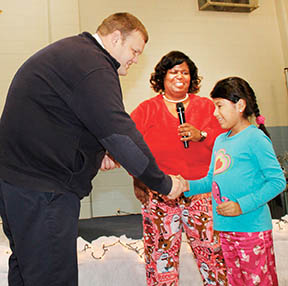 Paul Hollingsworth said it was a joy to have Chase Vann as a member of Pack #129. This marked Vann’s fifth year in Scouting.

“He was all boy; he loved the outdoors,” said Hollingsworth. “But when it came to his little sister, he was a loving young boy. Every time we went hiking or camping, Chase’s mother and little sister went as well…..it was a family affair for them.

“He was just a couple of months shy of making the transition up to the rank of Boy Scout,” added Hollingsworth. “We had planned one final camping trip sometime in January or February to complete his Cub Scout requirements in order for him to be eligible to make the transition.”

In the week leading up to the tragic fire, Hollingsworth said the Pack spent Saturday (Nov. 26) hiking at Merchants Millpond in Gates County followed by a regularly scheduled Den meeting on Tuesday night (Nov. 29).

“It was just another typical week for us, completing some projects and getting ready for the holidays and the start of another year in Scouting. It’s the Boy Scouts motto to always be prepared, but nothing could prepare us for what happened on Dec. 1. That was tough to handle and we’re still mourning the loss of Chase, his mom and his sister,” Hollingsworth concluded.

For Scott, the idea to honor the life of Chase Vann came through suggestions made by his classmates. She said the two fundraisers generated a total of $800 and all grade levels took part.

“I was really shocked when I learned that much had been raised, but it all went to four very worthy organizations and helped us deal with our grief,” Scott said.

The principal said Chase Vann was, “a very sweet, and quiet young man.”

“Chase was an ideal student,” she added. “He’s been here at Willis Hare since Kindergarten. As I mentioned earlier, Chase’s mom was very active here at our school. And his little sister, Shapira, was adorable. She would come here with her mom and always had her book bag with her, looking like she was almost ready to start her path here at Willis Hare. It just breaks my heart that they’re no longer with us.”

Scott vividly recalled the phone call she received in the early morning hours of the fatal house fire.

“I was told the bad news, and I immediately contacted our (Northampton County) Schools Superintendent to get the Crisis Team here on our campus,” she said. “By the time the children arrived that morning, we had Social Workers, school nurses, and guidance counselors from all over the county here.”

Scott and her Assistant Principal went to each classroom to share the sad news.

“It’s a part of our job, but we were fortunate to have the support staff on hand to deal with this extremely unfortunate situation,” she closed.

As the students exited a now darkened Willis Hare gym on Friday at the close of another school day, rays of sunshine greeted them as they made their way back to the main building. It was as though Chase Vann was filling their hearts with warmth and love, just as he had for the short 11 years he spent on Earth.

PENDLETON – Willis Hare Elementary School was briefly under lockdown Thursday when an erroneous report came in of a man... read more