AULANDER, NC – Barbara McGlaughon Jernigan, after eighty five years of life, passed away to her Heavenly home on Saturday, December 10th. She was surrounded by family members and dedicated nurses and staff from the Rich Square Health Care Center.

Barbara was a beloved wife, mother, grandmother, great grandmother, and a devoted Christian and woman of God who will be greatly missed by family and friends and caregivers. 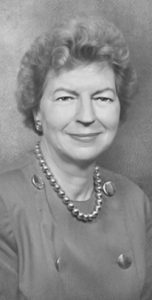 Born on June 19th, 1931 in Wilmington N.C., Barbara was the daughter of William Pleasant McGlaughon and Sallie King McGlaughon. She graduated from Ahoskie High School in 1949 and was the Valedictorian of her class.   She attended Chowan College and was head of her class in 1950. She also developed her skills and talent as a piano player after 12 years of piano lessons and shared that ability and talent with her family and her church.

After college, Barbara was a Secretary for W.H. Basnight in Ahoskie. She was a member of Ahoskie Baptist and Connaritsa Baptist where she taught Sunday School for the men’s Adult class, was choir director, and played the piano for her church. Other church leadership roles included Girls’ Auxiliary Leader and WMU President.

Barbara was a member of the Aulander Ruritan Club which she enjoyed. She also worked in the family business at Jernigan Cleaners for 50 years where she took care of the bookkeeping and other business responsibilities. She was also the PTA president at Aulander Elementary School.

She enjoyed her family, being an active part of her community, family business, and serving her Lord.

A visitation will be on Tuesday, December 13th from 7 until 8:30 p.m. at Garrett Sykes Funeral Service in Ahoskie, NC.

A Celebration of Life service will be held at Connaritsa Baptist Church, Aulander, NC, on Wednesday, December 14th at 2:00 p.m. The interment will follow at the Ahoskie Cemetery.

Memorial contributions may be made directly to Connaritsa Baptist Church or the American Diabetes Association or online to these organizations by visiting tmcfunding.com/search, then type Barbara Jernigan.

Arrangements for the Jernigan family are being handled by Garrett-Sykes Funeral Service – Ahoskie Chapel – and online condolences may be directed to the family by visiting www.garrettsykesfs.com.