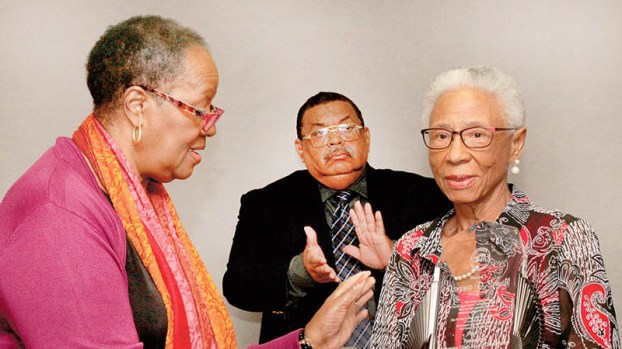 JACKSON – Two elected officials were honored here Monday as they took their respective bows and exited the Northampton County Board of Commissioners.

Public servants Virginia Spruill of Rich Square and Conway’s Joseph Barrett were each presented a keepsake item in honor of their work as elected officers of the county.

Spruill has served on the Commission since 2000, while Barrett served one, four-year term. 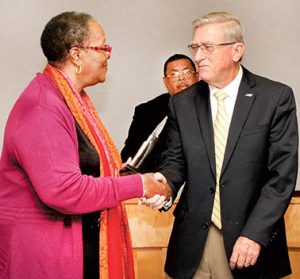 “We are pleased to have you two on our board over the years,” said then Commission Chair Fannie Greene. “You have done an excellent job representing the county citizens on this board. We thank you for your service and we will miss you.”

Commissioner Robert Carter, who was elected board chairman later during Monday’s meeting, said he enjoyed working with Spruill and Barrett.

“We have had a very cohesive board during their time,” Carter noted. “We will miss you and wish you Godspeed in all you attempt to do.”

The crystal plaques presented to both Spruill and Barrett were in appreciation for loyal and dedicated service as a county commissioner.

“Due to your guidance and superb knowledge of local government, Northampton County has prospered and grown to great heights,” Greene read from the plaques.

“It has been a pleasure and an honor to serve the citizens of Northampton County, and I will cherish it for the remaining days of my life,” stated Spruill.

“I appreciated this board welcoming me back in 2012,” Barrett stressed. “I knew very little about county government at that time. Each of the departments have been very receptive to me and the ideas I had, and this board was receptive as well.

“I wish to thank the citizens of Northampton County for allowing me this opportunity to serve,” Barrett concluded.

Spruill and Barrett each sought another term of office, but were defeated in the March 2016 Primary by Geneva Riddick Faulkner and Charles R. Tyner Sr. respectively.

Faulkner and Tyner were each sworn into office on Monday following the farewell ceremony to Spruill and Barrett.

Sounds of the season

AHOSKIE – Students, faculty and members of the public gathered together here the evening of Thursday, Dec. 2 at Roanoke... read more