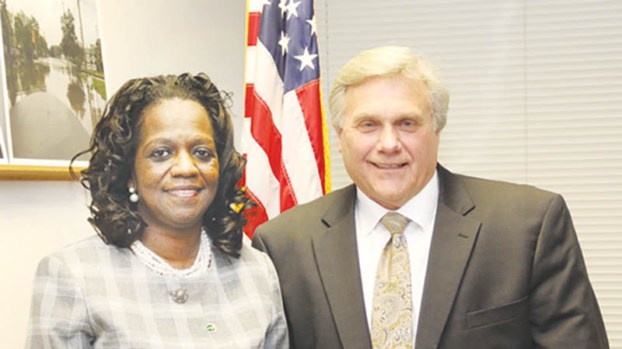 John Trent (right) has been re-elected as chairman of the Bertie County Board of Commissioners, with Ernestine Byrd Bazemore (left) selected again as vice-chair. The vote, taken at Monday’s monthly Commissioner’s meeting did not come without a bit of controversy. | Staff Photo by Gene Motley

In a split vote Monday night at the Bertie County Board of Commissioner’s meeting here, John Trent has retained chairmanship of the Board with Ernestine Byrd Bazemore keeping the vice-chair’s post; but their re-election did not come without a bit of controversy.

By a 3-2 vote the pair will keep their posts, but as the disputed vote suggests, there was a challenge.

Prior to the re-organization and election of officers, Trent and fellow Commissioner Ronald ‘Ron’ Wesson – both re-elected after running unopposed in the recent November election – were each sworn in for their second term on the Board by Clerk of Superior Court Vasti James.

In accordance with state statutes, County Manager Scott Sauer then presided over the proceedings and called for the election by the Board members of the 2016-17 chairman and vice-chair.

District-I Commissioner Tammy Lee recommended during discussion that Trent and Bazemore, who were both elected one year ago, retain their positions.  Lee then put the recommendation in the form of a motion before the group.

“Due to the relationship with FEMA, the work undertaken during the county’s flood damage, and the ongoing troubles with Bertie County Schools, I believe the seats should remain the same,” Lee noted.

Just before the County Manager’s call for a vote, Wesson interjected for a point-of-order. The District-II representative voiced his opposition to the carry-over; calling instead for a new chairman and he made a new motion nominating Bazemore for the top post.

Wesson’s point of contention was that the Commissioners had voted in December of 2015 for the leadership positions to not extend beyond one year’s tenure.

“This is something we all voted on,” Wesson maintained. “We did it here, and it’s in the record; it should be shown in last year’s (meeting) minutes.”

As puzzled looks crossed the faces of the Commissioners, County Manager, and County Attorney, there was also a silence in the audience. Sauer then recommended a short recess in order for him and Attorney Lloyd Smith to concur and produce evidence of a tenure vote taken at the 2015 meeting.

Following the respite, which lasted close to 20 minutes, Sauer produced a copy of the minutes and an audio-tape of the proceedings as evidence.

The printed minutes, recorded and maintained by Board Clerk Sarah Tinkham, did show that Trent and Bazemore accepted the nominations for a period of one year.  However, there was no record of a Board discussion or a vote on tenure.

The audio tape backed the recorded minutes: there was a motion on the nominations – both made by Wesson, who was chair at the time, seconded by Lee – and it passed unanimously.

“This record does not show that there was even any discussion,” Wesson persevered after the review. “We all agree there was discussion.”

“I don’t recall having that discussion,” said Lee, the first Commissioner to comment.

Bazemore then spoke to the assembled audience.

“Since no one can recollect, I will try to explain it,” she remarked. “I don’t think it’s fair for citizens to come here and hear a bunch of rhetoric: we need to be open and honest.”

Bazemore’s declaration was that in 2015, Wesson had sought a second term as chairman, but that the Commissioners had agreed amongst themselves to the one-year tenure, followed by rotation.

“Had he served two, then I would agree that everyone else serve two,” she continued. “I think this is a verbal contract we all agreed on: if we should rotate, then let’s rotate.”

Lee then conceded that there had been conversation among the Board about rotating the chair.

“When I was approached about the chairmanship,” Lee admitted, “I explained that with all that we are involved in (flooding, FEMA, the schools), then I thought that for the good of the county that he (Trent) should remain.”

“You said you had no recollection, now you do,” Wesson inquired.

“There’s no high person or low person on this Board,” said Bazemore. “The Board is about working together, and I just want us to be together.”

Cutting through the awkwardness and disagreement, Sauer reiterated there was still Lee’s motion on the floor.  The County Manager then called for a second to the nominations vote, which was made by Commissioner Stewart White.

Sauer asked if there were any other nominations and Wesson repeated his motion offering Bazemore’s name once again for the chairmanship.  The motion was seconded by Bazemore.

“We will take the nominations in the order that they were presented,” said Sauer.

On the vote for retention of the leadership: Trent, Lee, and White voted in the affirmative; while Wesson and Bazemore objected.

The motion passed by the 3-2 margin.

“Let me just say this, and I’ll say it honestly,” persisted Wesson, before the Board moved on to business. “We are deceiving the public if we sit here and say we don’t have any recollection of that discussion.  We all agreed to rotate, and there were comments back and forth in writing between Commissioners.  Now, to say we have no recollection betrays the trust in this Board as far as I’m concerned because there’s no reason to do this.”

As there was no switching of seats or nameplates, which usually follows a change in leadership, the Commissioners decided to forego a second recess and proceeded with their regular business.

WINDSOR – For the second time in three years, Bertie County students will be featured in a documentary film that... read more