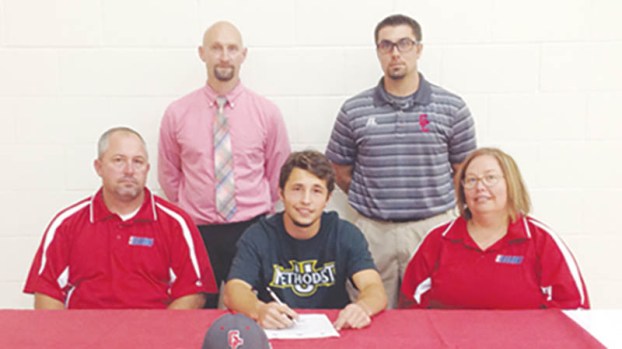 Smith signed with the Monarchs on the first day of fall National Signing Day back in November.  He was recruited to Methodist by head baseball coach Tom Austin and assistant coach Spencer Martin.

“They do very well in baseball, and I just liked the overall atmosphere at Methodist,” Smith said in an interview. “They were the bigger and better school and I hope when I go there I can play middle infield.” 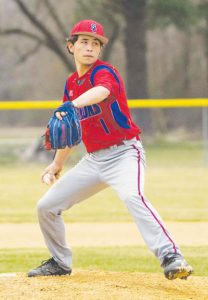 “I don’t think I’ll be pitching in college,” Smith said with a chuckle.

Two other college programs Smith considered before settling on the Monarchs included NC Wesleyan and Chowan.

“It was a no-brainer in making my final decision,” Smith insisted. “They were ready, I was ready and they were my first choice.  The coaches expressed a lot of interest early and were really anxious to sign me, so I decided to go with it.”

The Red Barons were 14-11 a season ago, and shocked Williamston Riverside in the second round of the NCHSAA 1A baseball playoffs; making it all the way to the third round.  Smith was also voted to the 1A Coastal-10 All-Conference team.

In addition to being a great student, according to his teachers, Smith was also on the ‘Barons’ soccer squad last fall; and for the past two summers Smith has also played American Legion Junior and Senior team baseball for Ahoskie Post 102.

Smith hasn’t forgotten his roots.  He hopes to major in Math Education while in Fayetteville and hopes he can return to his home and land a job teaching and coaching in the Gates County Schools system, preferably at his alma mater.

“D.J. has been a great asset to our baseball program at Gates County High School,” said second year Red Barons coach Jacob Harrell.  “(He’s) been a leader on and off the field and has been a tremendous teammate during his time as a Red Baron.”

“D.J. will be a great addition to an established baseball program at Methodist University.  I am looking forward to watching him reach his potential on the field and in the classroom at the next level,” concluded Harrell.

“I just want to play my regular game – both my senior year, and when I get to college,” Smith maintains. “I want us (Gates) to win the conference (Coastal-10) championship and de-throne Camden, Manteo, and Perquimans.

Gates County will open its 2017 baseball season on Feb. 28 against Pasquotank High School in Elizabeth City.  Their home opener will be Mar. 7 against Columbia at 4:30 p.m.