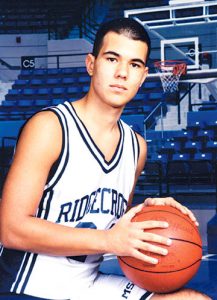 In addition to the three days of basketball, three scholarships are awarded in honor of the tournament’s namesake, Lt. Nick Brantley. Each year scholarships totaling $2,000 are given out during the event’s closing ceremonies.

The awards are presented by Nick’s parents, Keith and Joyce Brantley, and honor the younger Brantley and his contributions as a student-athlete at Ridgecroft School and for serving his country in the United States Navy.

At the same time (Thursday, 4 p.m.) Ridgecroft will host Northeast as they square off for their four games.

The championships at Ridgecroft will begin at 2 p.m. on Saturday with the j.v. girls game, followed by j.v. boys, varsity girls, and varsity boys.  The trophy presentation and awarding of scholarships will follow.

Brantley was commissioned as an Ensign in the United States Navy and underwent his flight training at Pensacola, FL Naval Air Station.  He excelled as a pilot and flew both fixed-wing and rotary-wing aircraft.

After receiving his Wings of Gold, Brantley reported to Mayport, FL for training to fly the SH-60B Seahawk. Upon completion of training, he received the Seahawk Award as the top student in the Fleet Replacement Squadron and rose to the rank of Lieutenant.

Brantley and his crew were killed on Sept. 24, 2005 when their Navy Seahawk helicopter went down off the North Carolina coast during a training exercise.