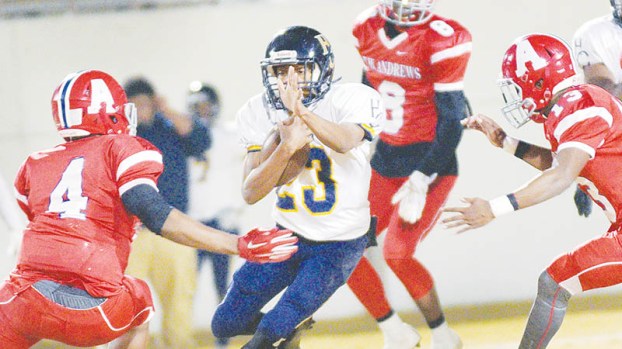 Honey of a win!

Hunter had tossed 30 touchdown passes, but this was his first score on the ground.

“I was discussing the situation with our coaching staff, and our entire offensive contingent asserted themselves into the conversation,” said a jubilant coach Terrance Saxby after the game. “They said they wanted to run a quarterback sneak, and it turned out to be a smart move on their behalf.”

Despite Hunter’s heroics, the Bears still had to hold on in the final 45 seconds as the Red Raiders completed a ‘Hail Mary’ to midfield.  With 34 seconds left High Point’s Josh Brown was stripped of the ball by Trey Bloodworth, his second fumble recovery of the year.

The Bears scored on their opening drive of the game on a Kyeem Perry 10-yard run. Noah Parker kicked the extra-point and it was 7-0 Hertford County.  High Point then scored to tie it on their next possession and it was 7-7 with 7:54 left in the first quarter.

Hertford County’s second score came on a one-yard Jaree Pitt run.  With Parker’s extra point it was 14-7, Bears.  Then on their next possession, Hunter threw a 28-yard strike to Rayshawn Beamon, and it was 21-7, Hertford County, at the end of the quarter.

Neither team scored in the second quarter, so the Bears took a 14-point lead into the locker-room at halftime.

Travis Steele had a 57 yard touchdown run through the Bear defense on the Red Raiders’ first possession of the second half and that cut Hertford County’s lead to 21-14.

But the Bears struck back, Pitt scored his second one-yard run for another score and Hertford County was back in front by 14 again with Parker’s kick, 28-14, with 5:52 left in the third quarter.

Brown then guided Andrews on a long drive culminating with his five-yard run at the end of the quarter to pull the Raiders within seven, 28-21 after three.

After the Bears were stopped, Kristopher Coleman had a 38-yard run for High Point, and the PAT tied the game at 28-28 with 7:41 left to play.

Brown then intercepted Hunter in Bear territory, stopping a Hertford County drive with 4:41 left.  But the Bears’ defense stopped Andrews on third-down on the 27 yard line and held the Raiders to just a 34-yard Ballisa Muhammed field goal with three minutes left in the game.  High Point had scored 17 unanswered to take a 31-28 lead.

On the kickoff, Perry set the Bears up at their own 37 with a nice return.  From there, the team went 63 yards in seven plays – the big one, a 21-yard scamper by Hunter on third and seven that got Hertford County into Raider territory.  After a time-out, Hunter scored what proved to be the game winner.

Hunter finished with 206 yards passing and scored a touchdown through the air, and another on the ground.   Two of his passes were to Wake Forest-bound Jaquarii Roberson, breaking his single-season school record of 66 grabs.  He now has 68 catches on the season.

Perry had 156 yards rushing on 25 carries.  Pitt had just two yards rushing, but both were one-yard scoring runs.  The Raiders had three backs with over 100 yards led by Brown with 133.

Hertford County had 438 total yards to 395 for Andrews.

The win raises the Bears’ record to 9-4 with their sixth straight win and sends them into the third round Friday night in Beulaville against East Duplin in the 2AA Eastern semi-final.