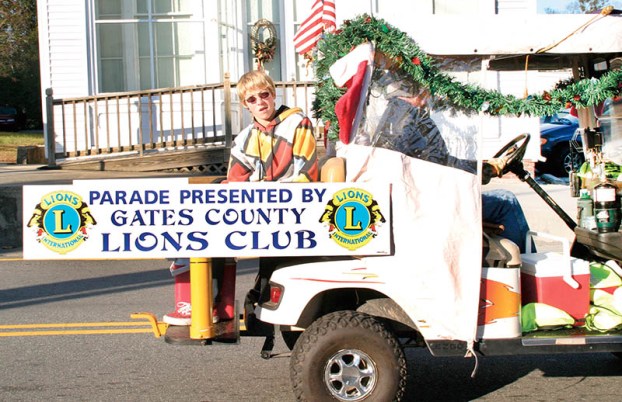 The 37th annual Gates County Lions Club Christmas Parade, set for Dec. 10 in Gatesville, will be held in memory of its founder, Bryan Salter (shown below), who passed away in October at the age of 80. | File and contributed photos

GATESVILLE – The show must go on, despite a heavy heart.

The 37th annual Gates County Lions Club Christmas Parade will be staged here Saturday, Dec. 10, but one familiar face will be missing.

Bryan Jerome Salter passed away on Oct. 14 of this year. The 80-year-old is credited as the founder of the local Lions Club’s Christmas Parade as well as getting that civic organization chartered in Gates County. 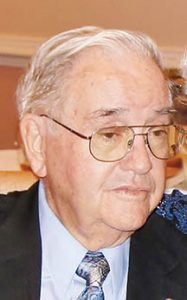 “I worked with Bryan for years on the layout of the parade,” Hofler added. “He had all the paperwork. Then, on the day of the parade, he was always positioned on New Road (adjacent to the courthouse) getting everyone in their correct position. He coordinated everything.

“In recent years there have been 70-plus entries, so his job was very important in getting everyone lined-up properly.

I want this parade to be dedicated in his memory. He always put so much time and energy into the parade. It took a lot of his time to make sure things were done right,” Hofler remarked.

Hofler recalled a conversation he had with Salter when visiting his home prior to his death.

“I told him that he started this parade and it will continue,” Hofler stated. “We will conduct the parade in his memory. I know he’ll be looking down on us from heaven, telling us what to do and how to do it.”

Hofler added that Mrs. Salter had kept all the parade records and contact information in a computer file.

“She put all of that on a thumb drive and gave it to me; if it had not been for that, it would have been tough as we would have to start from scratch,” Hofler said. “She told me that it was Bryan’s wish for the Gates County Lions Club to remain strong and involved in community projects, such as the Christmas parade. We certainly want to honor Bryan’s wish.”

There were 23 local men who signed the charter when the Gates County Lions Club was formed 40 years ago. That group included Salter and now retired Gates County Public Schools Superintendent John Perry.

“Bryan was the driving force behind the formation of our club here in Gates County,” Perry said. “He had been a Lions Club member in Hatteras when he was serving as a school principal there and then later in Camden County, also while he was a school principal. Bryan had a knack of pulling people together….that’s how we wound up with a Lions Club here.”

Perry stressed that the Christmas parade in Gatesville was Salter’s idea.

“He always led that effort; he coordinated that parade every year right on through last year,” Perry stated.

“He told us several months ago that because of his health he would not be able to be the parade chairman this year,” Perry noted. “That’s a big job to fill. There are people to contact; letters to be written, and information to be dispersed. What made the transition a bit easier was the fact that Bryan’s wife, Sondra, had kept all that information over the years. That saves a lot of time.”

Both Hofler and Perry worked with Salter outside of the local Lions Club.

“I didn’t work as closely with Bryan like John did, but he and I always got along together,” said Hofler, who spent 25 years with Gates County Schools, retiring as Maintenance Director.

“We were principals at the same time here in Gates County – Bryan at Sunbury while I was at the high school,” said Perry, who spent 10 years as the lead administrator at GCHS before launching a 12-year career as superintendent.

“Bryan was a highly capable person and a highly dedicated person,” Perry continued. “He was a good friend to a lot of people. He was well liked by his staff members at Sunbury and earned the respect of his peers at the other schools here in our county. He worked hard for the children of our county, and that work eventually led him to serve as assistant superintendent for two years and then as superintendent after I retired. He did a great job.

“I want this parade to be dedicated in Bryan’s memory. He always put so much time and energy into the parade. It took a lot of his time to make sure things were done right. But that’s the way Bryan was…..whatever he put his hands on it was going to be done the right way,” Perry concluded.

“It would be a big honor to have his family be a part of this year’s parade,” noted Hofler.

Hofler and Perry have reached out to Salter’s surviving family members in an effort to gauge their interest in participating in some way in this year’s Christmas parade.

A native of Atlantic, NC (Carteret County), Salter arrived in Gates County as the principal of Sunbury Elementary School. He later rose to become assistant superintendent of the county’s public school system. After Perry retired as School Superintendent in 1989, Salter was promoted to that seat. He retired four years later.

Salter graduated from both East Carolina College, and the University of North Carolina-Chapel Hill. He launched his career in education at Cape Hatteras School in Buxton as a teacher, coach, bus driver, and principal. He later served as principal at Camden County High School before coming to Gates County. When he retired as the superintendent of Gates County Schools, Salter had worked a total of 35 years in public education.

In addition to his work as an educator, Salter was active in his community. He was a deacon at Beulah Baptist Church in Sunbury. He served as President of the Gates County Rural Health Association, was the former Vice-Chairman of the Roanoke-Chowan Hospital Board and Finance Board, and served on the Gates County Social Services Board of Directors.

It has been a slow and tedious effort, but roadways across the Roanoke-Chowan area damaged from a double dose of... read more