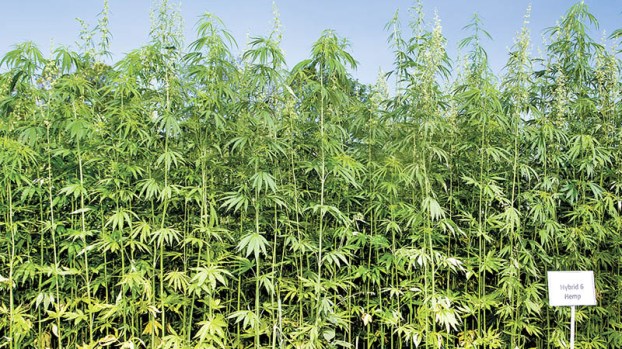 It has a long history in North Carolina. And it’s a legal history at that.

‘It’, is hemp, or cannabis sativa. Early hemp was used as a fiber 10,000 years ago. Now more modern practice are undertaken, such as using hemp to make animal feed, clothing, paper, plastics, auto parts, insulation and biofuel. Plant extracts also have been reported to have pharmaceutical benefits.

In case you’re smirking that there is no mention of burning it and breathing in the vapors, it’s because THAT is a different kind of hemp.

Hemp hadn’t been legal in part because the plant is a relative of marijuana and, with its six-pointed and serrated leaves, looks similar. But it lacks the active ingredient that makes marijuana a recreational drug, the psychoactive component tetrahydrocannabinol, or THC. Industrial hemp, the kind that’s being considered now as a new cash crop in North Carolina, is not the kind containing THC. In short, it won’t get you high.

Hemp’s ties to the Tar Heel state are not new. The plant was cultivated in the 1800s and early 1900s primarily for its fiber; and now it’s about to make a comeback.

In 2015, the General Assembly passed Senate Bill 313 calling for the creation of the Industrial Hemp Commission. The bill passed just days after it was introduced, attracting little media notice in the busy final days of the legislative session. The commission was specifically charged with developing rules and a licensing structure so the state would stay within federal laws.

“Our goal is to have a 2017 industrial hemp crop, but there are many, many steps we must work through before we can even put seed in the ground,” said Dr. Sandy Stewart, vice-chair of the Commission and director of the N.C. Department of Agriculture and Consumer Services Research Stations Division (NCDA&CSRS) in Raleigh.

“While the initial work has begun, farmers need to realistically understand that there are still significant bridges to cross between now and May of 2017, when planting could begin, Stewart continued. “That includes navigating import protocols to obtain seeds, since they would likely have to come from outside the United States.”

Among Troxler’s appointees is Fen Rascoe of Bertie County who has been farming for ten years. Rascoe currently grows clary sage, peanuts, wheat, soybeans and kanaf and he resides in Windsor.

“This would be a good rotation crop for our area farmers, because it’s proved to be so in other states,” said Rascoe in an interview. “In eastern North Carolina it’s going to be different because there’s no benchmark to judge it by since it hasn’t been grown in the state in nearly a century. I hope we see some really robust research that will make this a viable crop for our farmers here in the East.”

The Commission’s powers were strengthened, or certainly more clearly defined, with the passage of House Bill 992. That bill clarified the definition of research purposes and the responsibility of licensees. It also created civil and criminal penalties for any violations and requires the Commission to notify the State Bureau of Investigation, local sheriff’s departments and police about the location of all approved hemp farms.

During debate on the floor of the General Assembly there were concerns by some legislators who wanted to see a member of the clergy added to the commission because of concerns from the religious community about the possibility that hemp production could result in marijuana production. There were also worries that a renegade hemp grower might just try to illegally grow marijuana plants hidden in the center of a hemp field.

The bill also requires NC State University and A&T State University to oversee the hemp research program, which all licensed hemp growers would be required to join. Violations of the hemp regulations, including the placement of marijuana plants in industrial hemp fields, would be Class 2 misdemeanors with fines of up to $2,500.

“This product hasn’t been really available in this country for about 70 years, and it’s a whole new field now,” said Rep. Mark Brody of Monroe, one of the sponsors of HB 992. “We have an opportunity to be a leader, not only in production, but in the processing.”

Still, the bill quietly passed and once formed, the Commission raised $200,000 in private donations required to fund it.

“Getting that money raised by farmers and other contributors across the state was big,” stated Rascoe. “Without the $200,000 in financing the Commission really could not be formed.”

The first meeting held by the Commission began with work to establish rules governing a pilot program for industrial hemp production in North Carolina.

“We are now charged with getting the rules and the regulations based on the law, and then we’ll get the application process going” Rascoe added. “Not just anybody will be able to go out there and grow hemp; it’ll still have to be under a pilot research program. People can apply, but there’re still a lot of hurdles to go through between now and then. We’re trying to meet as much as we can to get all the I’s dotted and the T’s crossed.”

The Commission also comes about following congressional changes to U.S. farm policies that allow community colleges, universities, and other institutions to participate in pilot programs for hemp production. To begin the process for obtaining seeds for a first planting, NCDA&CSRS Plant Industry Director Vernon Cox has registered the department as an importer with the U.S. Drug Enforcement Administration.

The Commission will next focus on drafting rules for a system to permit growers to take part in the pilot program. It has a second meeting scheduled for Dec. 1. It will begin at 10 a.m. at the NC Department of Agriculture Agronomics Building located at 4300 Reedy Creek Road in Raleigh.

“It’s going to be a learning curve for everybody once we get going,” Rascoe concluded.

Part 1 of a series What would happen to the schools in the Roanoke-Chowan area if funding that the local... read more