AHOSKIE – Since its initial publication in 1845, Hans Christian Andersen’s “The Snow Queen” has been retold in a variety of forms, genres, and styles, with Disney’s Frozen the most famous recent version.

Following on the success of 2012’s Nutcracker Suite and 2014’s The Grinch, “A Frozen Dance,” this year’s holiday show, directed once again by Hope Miller, will bring to the Gallery stage the magical fairy tale as part of this year’s Christmas season. Like the two earlier shows, this recital will enchant audiences by providing a dance interpretation of a familiar holiday story. – 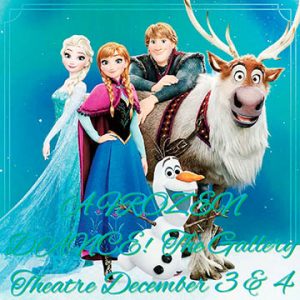 Roanoke-Chowan residents will thrill at the exploits of Anna and Elsa as their saga is brought to life on the toes of the area’s dancers. The world was enchanted by Disney’s story of these sisters in 2013, when the animated film was the top-grossing movie of the year, and viewers have loved the many songs from that musical, including “Let it Go” and “Do You Want to Build a Snowman?” Now, those songs and the story will be brought to life by the students of Hope’s School of Dance, who will embody the magic of the story.

Miller admits she came late to Frozen. As the mother of an eighteen-year-old daughter, she did not initially watch the Disney cartoon, but, once she did watch it earlier this year, she knew it had to be the focus of a performance.

Miller said, “I love the messages from the film. To me, it is about accepting your flaws and eventually embracing them and understanding that sometimes it’s our flaws that make us special and individuals.”

Miller designed her dance recital around these themes of individual value and human connection through understanding, as she found ways to let each of her dancers stand out as special and individuals through their performance.

She also was impressed with some of the qualities that make this fairy tale different. Where many traditional stories have the prince save the princess, this adventure is defined by the strong princesses at its center. Instead of waiting on the man to save the day, the supposed “Prince Charming” proves to be a jerk, and, instead of relying on him for heroics, “the princess saves herself along with the love of her sister.”

Miller found this “fabulous” twist a perfect 21st century touch on an old idea. The hero here is the princess, so she is in control of her own fate, as she writes her own narrative. On the stage, that twist is brought to life through inventive and exciting choreography performed by the enthusiastic students from Hope’s School.

The school’s hip hop boys class will take on the roles of the trolls, with Kristoff played by the talented Zack Wise. As Miller says, “we are, given our location, challenged to find male dancers old enough to take on all male roles, so one of our gracious female students, Colleen Curley, has agreed to play the role of Hans.”

Sven the reindeer will be played by Martina Farmer, with the lovable snowman Olaf brought to life by Catie Wise. The sister princesses, Anna and Elsa, will be performed by Emily Brown and Makayla Jones, respectively, as they help bring magic to the Gallery stage and embody Miller’s vision of this classic story.

The students performing in this recital are very excited about having the chance to turn Hans Christian Andersen’s fairy tale into their own artistic creation.

“The music,” Miller reminds, “is wonderful, and I’m sure the audience will sing along as the characters dance on stage, bringing the story to life.”

Audiences are invited to join in on the fun as this classic is given new life through the amazing choreography and direction of Hope Miller and through all of the school’s impressive dancers.

Audiences of all ages will love this production as they are enchanted by its story, impressed by its dancing, and touched by its message.